In Côte d’Ivoire, the cocoa country par excellence, ECOOKIM (Union des Sociétés Cooperatives Kimbê) is rightly a pioneer. This cooperative, founded in 2004, is a national union that now brings together 23 local cooperatives in the country’s various cocoa growing areas.

ECOOKIM defends the interests of no less than 12,000 of the most disadvantaged cocoa farmers. Its mission is to improve the quality of their cocoa in order to conquer the international market. In 2010 the cooperative obtained the Fairtrade certification, followed shortly afterwards by Utz and Rainforest Alliance.

It goes without saying that ECOOKIM concentrates primarily on its core economic tasks: through training, projects and loans, ECOOKIM provides its members with technical support so that production and returns increase and actively looks for export opportunities, both with regular and fair trade customers. But the union also plays a significant social role. For example, it has already built several schools, health centres and wells and is raising awareness among communities about malaria and environmental problems. ECOOKIM and its network of affiliated cooperatives employs more than 200 people.

If there is one area in which ECOOKIM has also tried to play a pioneering role over the past decade, it is the fight against child labour. According to the latest figures, almost 1.2 million children still work on cocoa plantations in West Africa, 100,000 of whom are child slaves. This is due to the widespread and distressing poverty among cocoa farmers. All members of ECOOKIM must therefore sign a charter stating that children may only work on a plantation on condition that they attend school. In a number of communities ECOOKIM has built its own schools, partly thanks to the Fair Trade premiums and the Tony’s premium. The latter refers to the extra premium that the Dutch company Tony’s Chocolonely pays on top of the Fairtrade premium. Tony’s is a maverick in the cocoa world: from an action group on child labour in the sector, the organisation evolved into a commercial chocolate producer with a clear message: “Together we make chocolate 100% slave-free”.

Two of the four Ivorian cooperatives where Tony’s gets his cocoa are members of ECOOKIM. Tony’s and ECOOKIM jointly implement the Child Labour Monitoring & Remediation System (CLMRS) of the International Cocoa Initiative (ICI), where people within the community are trained to report cases of child labour. Together with the parents, the cooperative and ICI, solutions are then sought. Nestlé also works with CLMRS, which is widely recognised as the only scalable system currently available to tackle the problem.

In 2017 ECOOKIM received financial support from the Trade for Development Centre (of the Belgian Development Agency Enabel) for a very concrete project aimed at keeping three of the member cooperatives in remote areas up to date on the quality of their cocoa beans. The cooperatives in question were CNB, COOPAPIG and KANWORI. In previous harvests, the quantity of germinated or mouldy beans was too high, which led to shipments being rejected for export.
Efforts were made in various areas to improve quality:

On delivery of the first harvest following the project year, 40% of CNB and COOPAPIG’s cocoa beans were exportable. That is a lot better than in previous campaigns. Only the KANWORI cooperative lagged behind. This was partly due to the age of their trees. The most positive point, however, was the clear improvement in quality among the 300 farmers selected. Half of them achieved quality grade 1 for their delivered beans. This is promising for the future, when they will share their acquired knowledge more and more with their community.

For ECOOKIM, the conclusion is that training and monitoring of farmers is the best way to achieve quality cocoa, which in turn is a prerequisite for gaining access to the market. In order to underline this, ECOOKIM always invites the managers of the other cooperatives during the installation of the quality control laboratories. At the end of the project, ECOOKIM undertook to continue the support with funds from the Fair Trade premiums. In addition, the organisation has also conceived the ambitious plan to produce its own chocolate in the future.

The financial support by TDC ran from December 2016 to December 2017 and amounted to € 43,495.59. The direct beneficiaries were the 300 members of the three cooperatives COOPAPIG, CNB and KANWORI who followed training, indirectly 2356 producers including their families.

Cocoa in Côte d’Ivoire: child labor on the increase during lockdown

According to a report by the International Cocoa Initiative (ICI)*, child labor in Côte d’Ivoire’s cocoa sector increased during the lockdown brought about by the COVID-19 pandemic. 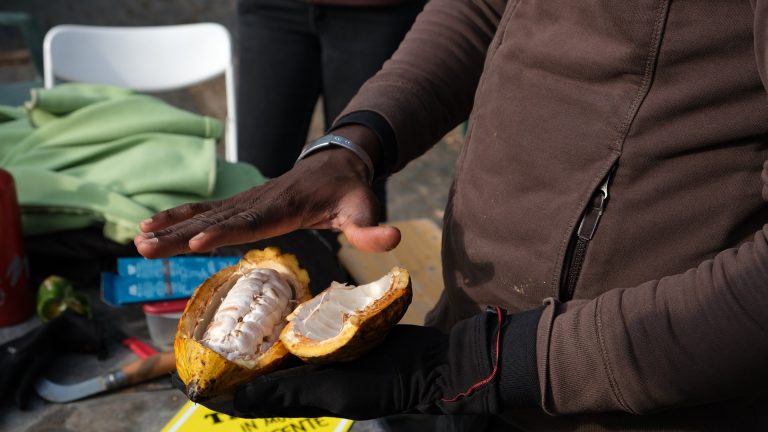 ECAM: In Côte d’Ivoire a TDC coachee is on track

Your favorite chocolate’s cocoa is produced a long way from here. Cocoa is grown by producers such as Djakaridja Bitie, a representative of the Cocoa producers’ cooperative ECAM in Cöte d’Ivoire. ECAM is often showcased as a fair trade model in Cöte d’Ivoire. We take a closer look at the steps they took. Christine Englebert of Enabel’s Trade for Development (TDC) has coached this cooperative since 2017. 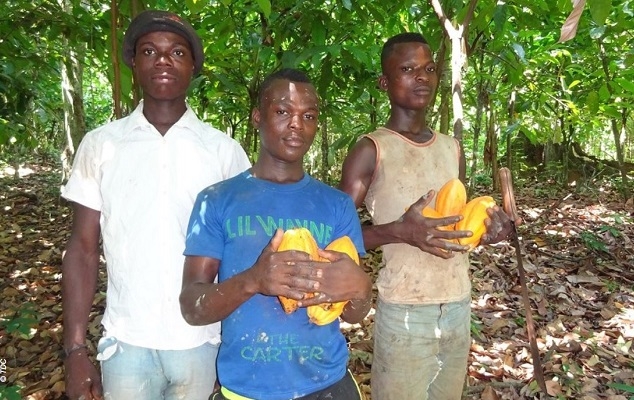 In recent years, there have been numerous studies attesting that cocoa producers in Côte d’Ivoire, the main producing country, live in poverty. They earn EUR 0.86, around 1 dollar a day, according to Barry-Callebaut and the French Development Agency[1]. This income keeps them below the poverty line[2] and to make ends meet they have to resort to child labour and rampant deforestation (the productivity of cleared land required less labour in the early years).