Global organic area continues to grow – Over 71.5 million hectares of farmland are organic

2018 was another record year for global organic agriculture. According to the latest FiBL survey on organic agriculture worldwide, organic farmland increased by 2.0 million hectares, and organic retail sales also continued to grow, reaching another all-time high, as shown by the data from 186 countries (data as of the end 2018). The 21st edition of the study “The World of Organic Agriculture” published by FiBL and IFOAM – Organics International shows a continuation of the positive trend seen in the past years. This annual survey on organic agriculture worldwide is supported by the Swiss State Secretariat for Economic Affairs (SECO), the International Trade Centre (ITC), the Sustainability Fund of Coop Switzerland, and NürnbergMesse, the organizers of the BIOFACH fair.

The global organic market continues to grow and has passed the 100 billion US dollar mark
The market research company, Ecovia Intelligence, estimates that the global market for organic food surpassed 100 billion US dollars for the first time in 2018 (almost 97 billion euros). The United States is the leading market with 40.6 billion euros, followed by Germany (10.9 billion euros) and France (9.1 billion euros). In 2018, many major markets continued to show double-digit growth rates, and the French organic market grew by more than 15 percent. Danish and Swiss consumers spent the most on organic food (312 euros per capita in 2018). Denmark had the highest organic market share with 11.5 percent of its total food market. 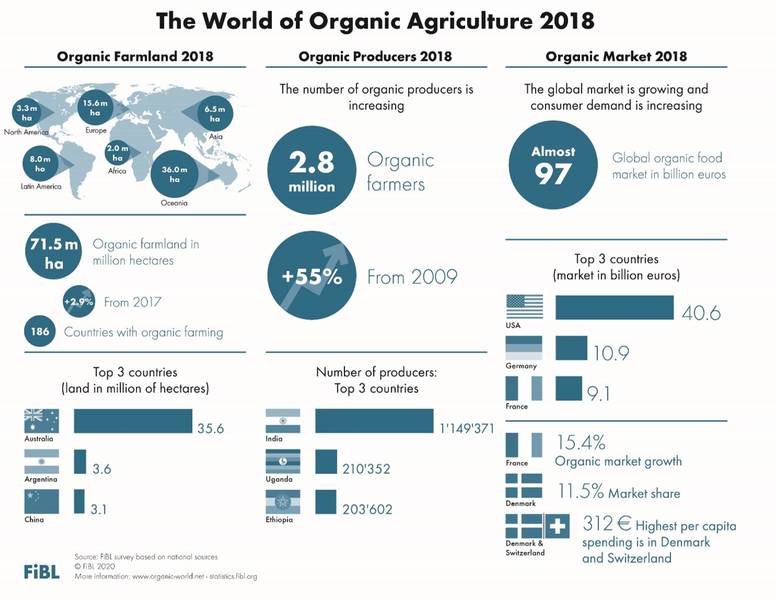 According to Dr. Monica Rubiolo from SECO, “Access to good quality data on organic farming not only helps to measure success toward achieving the Sustainable Development Goals but also to orient decision-makers and other stakeholders along the whole value chain.” Joseph Wozniak from ITC believes that “This publication provides key insights for those who attach importance to environmental conditions behind the products produced in their countries or sold in their nation’s shops.”

“The global organic statistics have proven useful for development programs and supporting strategies for organic agriculture and markets, and they are crucial for monitoring the impact of these activities. This publication shows our ongoing engagement with transparency in the organic sector” say Louise Luttikholt, IFOAM – Organics International Executive Director, and Professor Urs Niggli, director of FiBL.

The World of Organic Agriculture