Since several years the Trade for Development Centre has been coaching cooperatives active in fair or sustainable to better market their products. Very often it was confronted with the organisations’ poor knowledge of how to manage their organisation. Producer groups did not have the tools to carry out a financial or organisational analysis of their structure, despite the fact that this analysis is essential to develop a realistic marketing strategy.

This led to a new series of modules, more specifically coaching in business management (financial, organisational, governance, etc.). This report outlines our initial experience with the new module in Uganda, Rwanda and Benin.

Cooperatives that venture into fair and sustainable trade often have a great deal in common: a genuine commitment, responding to a local problem and great potential, but also a lack of resources and market insights. As this “weakness” is a common thread in the eyes of the TDC, we initially decided to offer these projects and cooperatives coaching and support in the marketing of their products.

Modules taught by a TDC coach on-site are key in this approach. “Our mission is to listen to producers and to structure the different elements with them to enable them to think for themselves about the most appropriate strategy,” explains Josiane Droeghag, International Trade Officer for the TDC. “This allows them to make the most of the social and sustainable development of their organisation. After all, the goal of our intervention is not trade, but trade for development.” You can read up on the two pilot projects and two coaching initiatives in the article The market support for small producers in Africa.

Often, an additional weakness emerged in the submitted files and during the sessions, i.e. the difficulty of developing marketing plans without being able to rely on reliable figures, without having the time to work on the organisational management of the structure, without ensuring good governance, etc. A more comprehensive approach was needed. Therefore, the TDC decided to offer a parallel coaching path in business management.

Virginie Bartholomé, Finance and Business Management Officer for the TDC explains, “African cooperatives have access to training and consultancy, but these generally lead to analyses and reports written by outsiders which cooperative members struggle to understand and they appropriate very little or nothing at all. Our approach is different: our coaches work in a participatory way with organisations. They detect their own problems and find solutions, guided by an external. They are the driver and owner of the process, not the TDC or the coach.”

As with marketing, the offer comprises customised sessions, supported by a coach appointed by the TDC. Our coaches not only have considerable expertise in business management and sustainable trade, but also in participatory management.

The first year consists of two 6-day modules. The coach visits the producer group two times: the first module is to help them understand their organisation better and the second one to co-create management tools adapted to their context and needs that will allow them to measure their evolution. Afterwards, with the coach’s feedback and in consultation with the organisation, the TDC decides whether a third or fourth module is necessary.

The Enabel programme in Benin added another five organisations. The Support Programme to the Development of Agricultural Value Chains in Benin (PROFI) runs from 2015 to 2019 and targets three value chains (cashew nuts, rice and vegetables). The first sessions started in the latter part of 2017.

In 2002, a number of farmer groups in the South East of Rwanda established the KOAKAKA coffee cooperative. They developed their organisation step by step, including two washing stations. With the support of the government and of NGOs they improved the quality of their arabica and obtained the Fairtrade label. The cooperative now has 1,300 members. Their main asset is undoubtedly the quality of their specialty coffee which is very much in demand on the international market.

Josiane, a TDC member and marketing coach, visited KOAKAKA in 2016. These sessions highlighted the organisation’s dependence on Rwandan trader Rwashoscco. Hardly anyone within the cooperative knew who bought the coffee which is why it was decided to do some prospecting. This resulted in new Japanese and Australian clients. 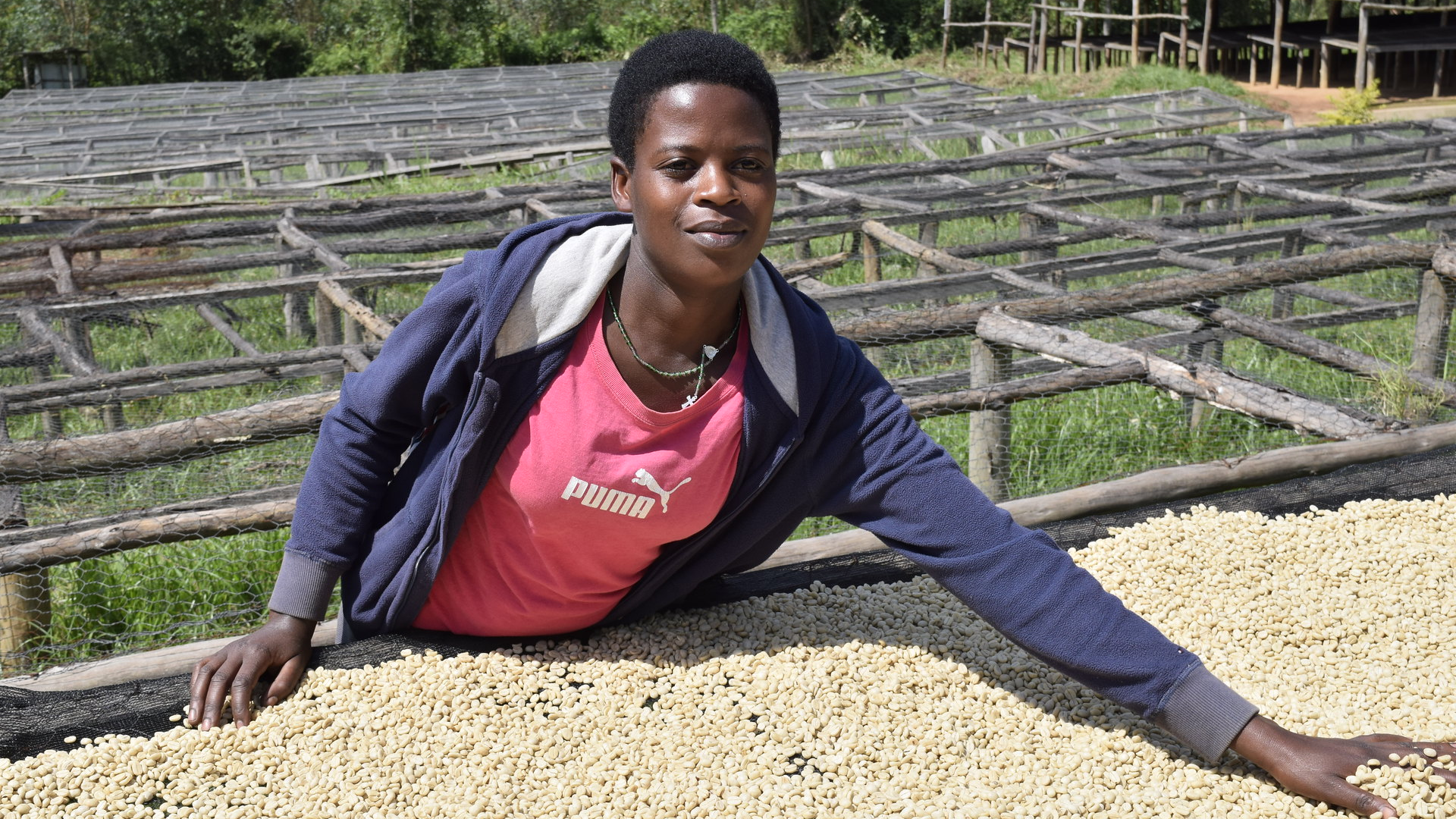 In October 2017, the coach, Maxime Bacq (Groupe One) went to Rwanda for the first business management module: “When going through the 2016 Financial Statements, Bonaventure Safari, the organisation’s Executive Secretary, and Elie Kabera, the accountant were well prepared. It was a ‘high-level’ session.” But then the real work started and staff and coach looked at the tools that had to give them a better understanding of the organisation’s situation. Much of this was new, such as long-term investments and depreciation, or calculating how many members were needed to make the planned third washing station profitable.

Later, an assessment was made of turnover and margins, and an updated budget for 2017 and a budget forecast for 2018 were developed. Finally, attention was paid to the interest due each year by the organisation to its credit providers, as the annual cycle of expenditure (of the farmers) and revenues (from buyers) were out of sync.

“The highlight of this intensive week was its participatory nature,” concludes Maxime. “Bonaventure and Elie were not familiar with some of these tools but they ended up filling them in completely. In preparation of the second module they can work with these tables to make analyses and prognoses.”

In 2007, a group of young farmers who live on the slopes of Mount Elgon in eastern Uganda established the United Organic Coffee Growers (UOCG). They obtained organic and fair trade certificates, but these remained in the hands of an Ugandan coffee business that had funded the initiative. With its current 1,000 members, the farmers’ cooperative believes it can handle its own marketing and explore international markets for its high-quality arabica. The question is whether this initiative is financially viable too. 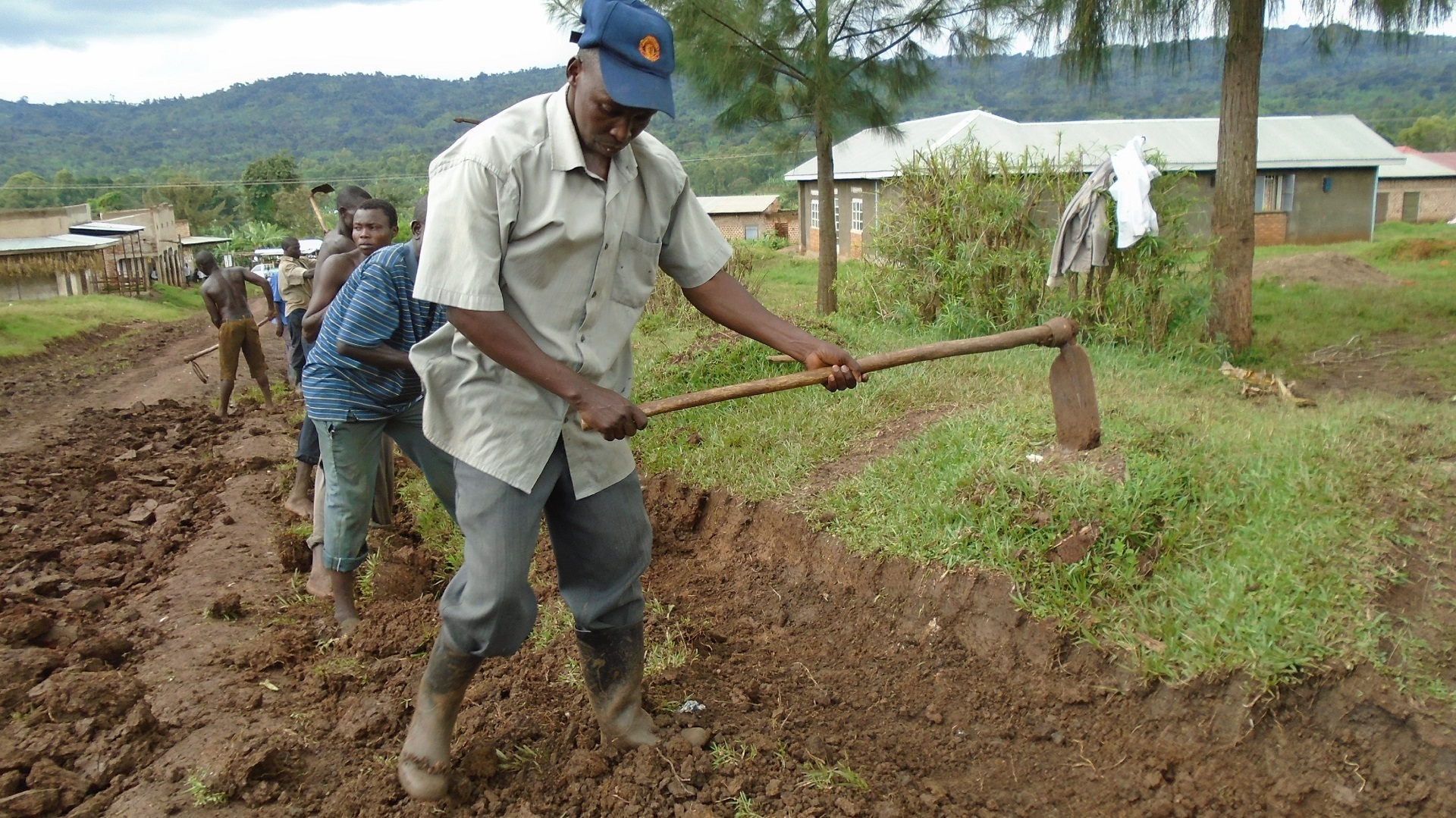 During the first session in December 2017, the coach, Thomas Poelmans (Green Crossroads) and the organisation’s staff made a price benchmark, including transport costs. The conclusion was that it should be possible to sell directly to coffee roasters and retailers higher up in the international coffee supply chain if progress were made in management and financial management.

Until now, the cooperative’s budget was project-level, and not organisation-level. During the session, a start was made on drawing up the Financial Statements for 2017 and a financial plan for 2018-2022.
This was further completed by the organisation’s staff after the session.

“Right now, they are limited because they lack the resources for a financial officer, but they are motivated and have made progress,” says Thomas. “They want a peeling installation of their own. It would be a major extra service for their members and create more added value. We made an investment assessment in December and at the second session we aim to finalise the investment file to submit it to potential investors.”

With 1,600 members the Network of Pineapple Producers of Benin (RéPAB) comprises almost one-fifth of the country’s pineapple growers. Since 2003 the cooperative has made progress and is both organic and fair trade certified. In 2016, it succeeded in contracting a local business that makes fruit juices. RéPAB was forced to upgrade under that agreement, and this included the management of the organisation. 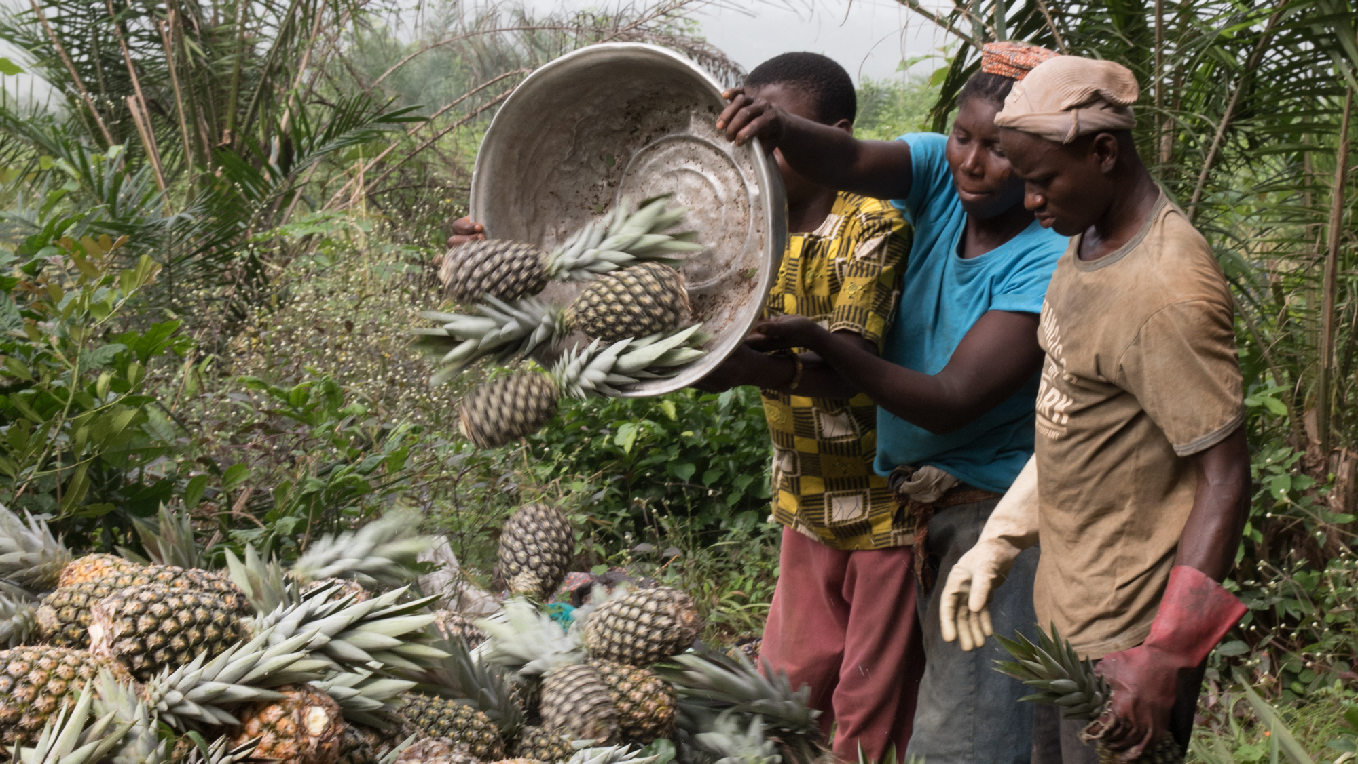 The first coaching module was organised at the end of 2017. The first days focused on the cooperative’s own operation. Also because of a recent issue – a load of pineapples was refused because of high acidity – an interesting discussion was started about the tasks and responsibilities of staff in the organisation’s organisation chart. Staff members then looked at the figures, particularly of gross and net margins, business revenue and subsidies and fixed and variable costs. The exercise regarded both 2016 and 2017, and the conclusion was that the margin currently paid to the juice-making business, is too low to pay all workers and to ensure a ‘fair’ price.

“We then looked at the whole pineapple value chain,” says Vincent De Grelle (Valmosan), the TDC coach for their sessions. “It turns out that only EUR 0.25 goes to the farmer in Benin of the EUR 6.5 paid by the European consumer for a litre of organic pineapple juice. This helped them to understand that the juice business or other players in the supply chain to Europe could claim a broader margin.”

“This coaching session came at the right time,” concludes Damien Z. Kiki, director of RéPAB“ We are now aware – at an important moment for the organisation – what being profitable and competitive means.”

Enabel has a major programme in Benin. The Support Programme to the Development of Agricultural Value Chains in Benin (PROFI) is an agricultural project that runs from 2015 to 2019 and targets three value chains (cashew nuts, rice and vegetables) in two regions of Benin, the Atacora/Donga in the North West and Mono/Couffo in the South West. 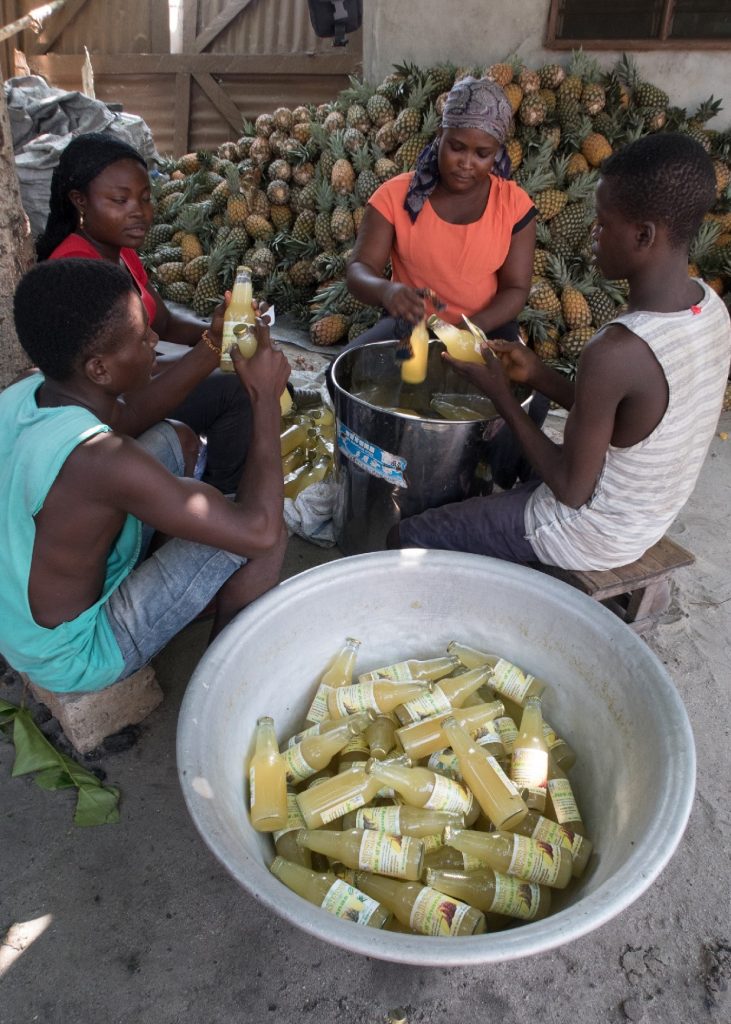 One of these is FAKO, a growing micro-enterprise that was established in 2007 by entrepreneur Colette Yehouenou. In her garage, her courtyard and a small workshop, a team of 20 seasonal workers manually process vegetables and fruit into juices and sauces. The quality of their products far exceeds the sugary and diluted Chinese products on the local market and they even succeed in finding their way to neighbouring countries. FAKO recently had to refuse an order from Nigeria because it was unable to handle the volume. It is a long way still to reaching the target – 500 cartons of juice per week. The need for instruments to achieve such growth and remain profitable was the reason for TDC coaching.

“FAKO is like a sailing boat which is pushed forward by the wind but lacks navigation instruments and is unaware of the obstacles on its course,” is how TDC coach Vincent De Grelle describes the baseline situation. Colette agrees: “I have had the opportunity to launch myself in a project to provide funds for a production line, but I do not want to navigate blindly. I first want to know where I am heading.”

During the December 2017 session, several Excel sheets were filled out for October and November. It turned out that production lots were not assigned numbers, but production data such as fixed and variable costs, turnover, margins and profitability were listed for every product lot. It was a clear instruction for the team: get used to correctly registering data with clear procedures and following assigned responsibilities. Based on this first exercise, a preliminary budget for 2018 and a catalogue of products and prices were drawn up. Vincent predicts, “these data will allow us to proceed with a thorough analysis of figures and processes in a second session. This will definitely work considering the enthusiasm we noticed.”

Wilma Frouke Baas, joint officer for Enabel within PROFI is also positive: “this kind of expertise is often offered to projects, but it is rarely adapted to real needs. Here in Benin the TDC succeeded in working very flexibly. All of the five projects coached were able to focus on their own needs. Such customised expertise is not available otherwise in Benin. It would be interesting though to involve local coaching entrepreneurs. That way we would build local expertise too.”

Towards a comprehensive approach

In recent years, the needs of African cooperatives and producers’ groups are understood better, which has led to an offer of financial support, coaching in marketing and in Finance & Business Management. To address the needs of organisations even better, the TDC launched a comprehensive approach combining the three and offering them as a customised package. That way, the TDC offers the organisations which it supports all the tools they may need to develop their own sustainable future.