GingerLove is a hot frothy drink. This mix of citrus fruits, ginger and herbs has made its way from Lombardia, the restaurant where it was created, to many a kitchen. Meanwhile, its creator, Alain Indria, has designed two new flavours: Coconut Vibrations and GreenLove. 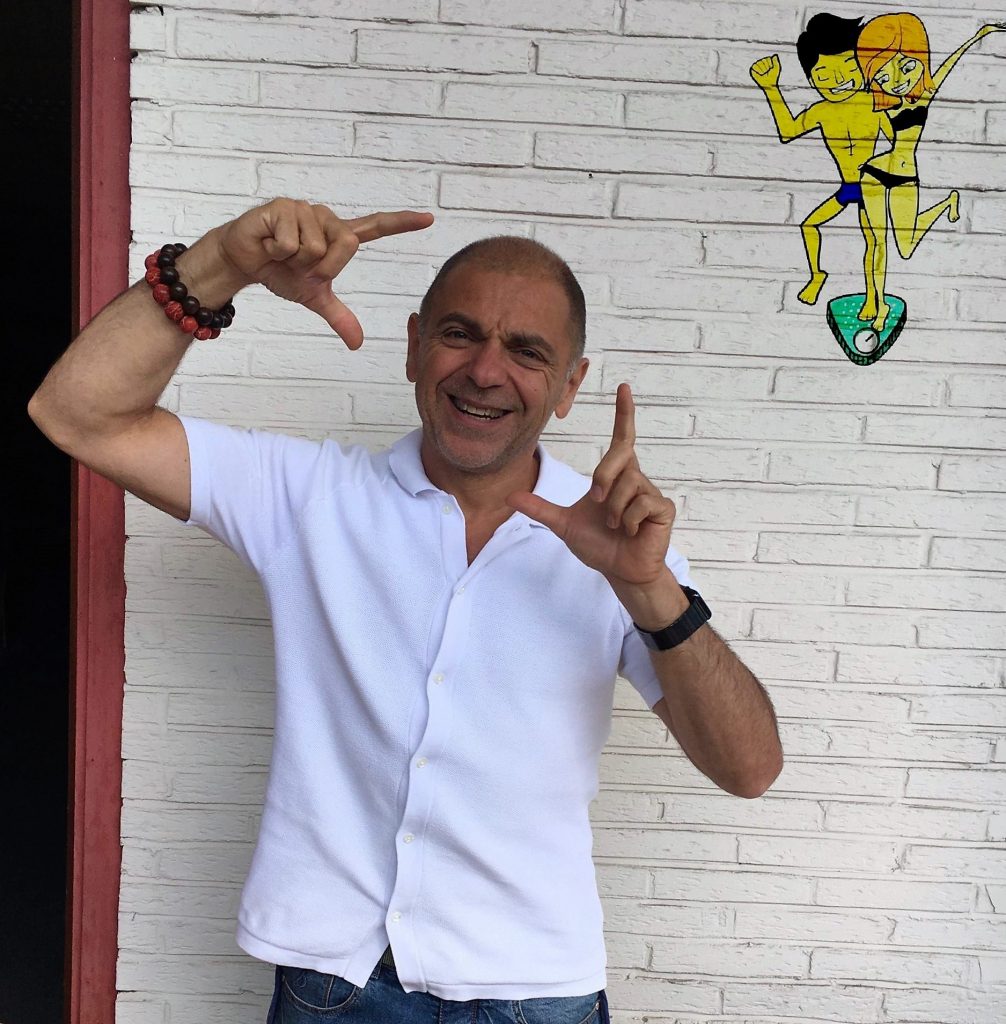 GingerLove was created by accident at Lombardia, a popular vegetarian restaurant in Antwerp. Some ten years ago, Alain Indria, the son of Lombardia’s founding mother, made himself a hot drink on the basis of citrus fruits and ginger. A customer asked for a sip and thought it was delicious.

“Many other customers wanted to try it and that’s when the ball started rolling,” says Alain Indria, whom we meet at the legendary restaurant. “I cannot stand coffee and I find tea rather flavourless. So, I mixed ingredients into a brew that pleased me and gave me a shot of energy. Five tea bags with herbs, flowers, juices, etc.”

There is nothing that Alain likes better than to create flavours to please people. “There have been cooks on my mom’s side of the family for 120 years. I don’t like cooking, but I love creating flavours. I even dream of them.” Alain also created the vegetarian pâtés that feature on Lombardia’s menu. “The idea pops into my head and I can give an accurate description of the taste. After many experiments at Lombardia I had it: ‘Eureka!’”

Because of all the enthusiastic reactions Alain decided to put the ginger drink on the menu at Lombardia. This healthy frothy hot drink was an instant hit. And in 2010 it became the official hot drink of the Belgian pavilion at the Shanghai World Expo. At the time, Alain had just started selling the drink – which was baptised GingerLove – in boxes. “People wanted to drink it at home too. It was a long search to find the right ingredients, but eventually I succeeded in developing a high-quality healthy drink.” 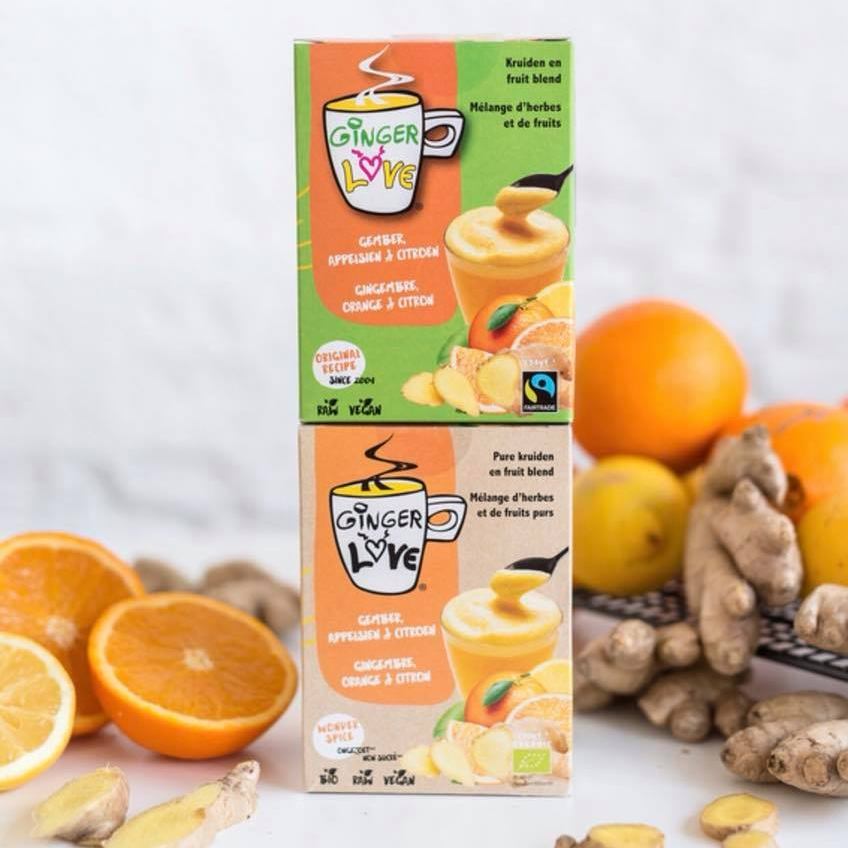 “The whole world meets in Lombardia,” says Alain while he enthusiastically greets a customer who has just entered. “From day one I wanted to give something back to the world,” Alain continues. “Originally, GingerLove was a conventional product, but we wanted it to be both organic and fair trade.” Alain was used to working with organic suppliers because Lombardia serves mainly organic food. Vredeseilanden helped Alain in his search for fair trade ingredients.

“In fact, I didn’t know Vredeseilanden. But I asked around and everyone –young and old, trendsetters, rich and poor – had a positive story to tell about Vredeseilanden. Also,” Alain adds laughing, “the name reminded me of peace and love. Vredeseilanden has really helped us make GingerLove into a fair product.”

Developing the Lombardia hot drink was a process of trial and error. “It was tough, but also fun and interesting,” says Alain. “Luckily, I don’t give up easily, but I must admit things were difficult. I ordered ingredients on the basis of samples. Once, I ordered three tonnes of an ingredient, but on delivery the product looked very different and it tasted differently too. That can be fatal for a small business.”

“By working with Vredeseilanden and – more recently –with Fairtrade Belgium, I have acquired a considerable knowhow about food, which really helps to create new flavours,” says Alain. “A few months ago we launched two new drinks: Coconut Vibrations with coconut and pineapple and GreenLove on the basis of Matcha and apple.” Eventually, Alain wants to develop a nice assortment of flavours under the “Lombardia Hot Drinks” brand.

“I have noticed that you can conquer new markets with the Fairtrade label. Some multinationals launch one fair trade product and leave the remainder of their product range unchanged. But with this single product they are introduced to major retailers and are able to promote the whole of their product range with the public. I don’t see why I shouldn’t go all out for fair trade and organic products. It’s normal isn’t it. After all, I grew up in ‘peace and love’, you know.”

Lombardia Hot Drinks are sold mainly in organic shops, delicatessen stores and bars and restaurants. “Many bars and restaurants are looking for something healthy, tasty and fair trade,” says Alain. “Still, most of our customers are women, who seem more open to innovation than men. They are my ambassadors.” Alain points out a woman who has just arrived. She once tasted GingerLove at a gym but could not find it in her neighbourhood. So, now she meets Alain to discuss the matter.

A couple of Oxfam-Wereldwinkels world shops also sell Lombardia Hot Drinks. At least 20 percent of the ingredients of a composite product must be Fairtrade certified before the product can be labelled. Oxfam-Wereldwinkels raised the threshold for products in its shops. “51 percent of ingredients in the product must be fair trade. Our drinks are 67 percent Fairtrade, so we are allowed on the shop’s shelves.” 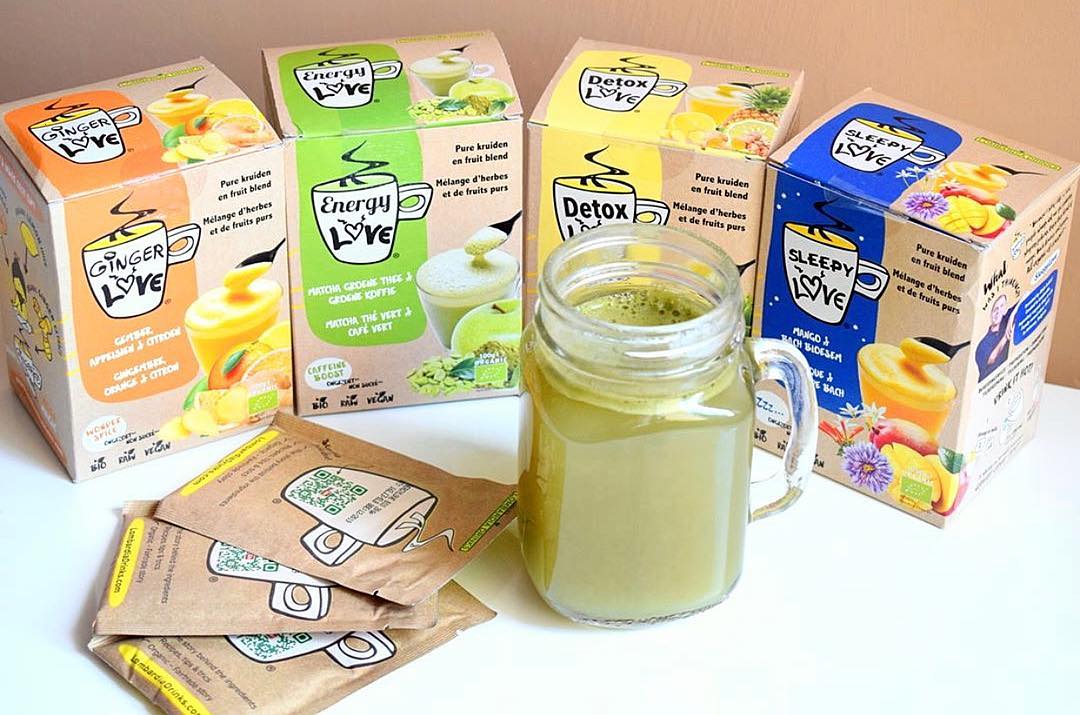 Alain would prefer to have 100 percent fair trade products. “But that’s not easy, simply because not all products are available under organic as well as fair trade labels. So, when I make a recipe I have to consider which ingredients are organic and which are fair trade and try to find the perfect taste. If the recipe can only be made with organic products that cannot be fair trade – because of the ingredients’ origin – we still try to be as fair as possible by working with local and European organic producers.”

In Alain’s opinion fair trade and organic farming should go hand in hand. Currently, 80 percent of the ingredients of the Lombardia Hot Drinks are organic and 67 percent Fairtrade. “Fairtrade Belgium now helps me find farmers who are both Fairtrade and organic or want to switch to organic farming. That way, we hope to obtain the organic certificate in some 4 to 6 months.”

“Production is local. All additional activities such as the production of cardboard and the printing are also done within a 50 kilometre radius. All of this is part of fair production to me. For instance, I am not going to buy Czech cardboard when the same product is available in Belgium. It is a way to secure local employment. And I believe that consumers are willing to pay for that even though it is more expensive.”

The choice for organic and Fairtrade ingredients and for local production increases production costs. “So, I must have a high turnover, or the story ends,” says Alain. “Therefore, we have to work with big customers, which is not easy for a small company. We have a key account manager who also takes care of exports. Our products are available in the Netherlands in De Tuinen retail chain and we work with a good retailer in Sweden. We also have contacts with retailers in Norway, Finland and the UK.”

Alain wants Lombardia Hot Drinks to remain a family business. “A few venture capitalists visited us already. I have never been good at following orders so I thanked them kindly for their proposals. Mind you, our business has to make a good turnover, otherwise we cannot survive on our own. But I believe in my drinks 100 percent and I really love them!” says Alain laughing. “It is still very fascinating and I see the business grow every day, which is a great feeling.”