PrevPrevious publicationBelvas, a passion for chocolate and exports
Next publicationMarket study: Fairtrade products in KenyaNext

Barbara Brugmans is a woman of heart and extraordinary energy, and in her own way she makes her own contribution to cooperation with and for the benefit of women all over the world. Just ten years ago, she started her own online shop for fair trade almonds. In 2010 her efforts were rewarded with a Be Fair Award from the Trade for Development Centre. 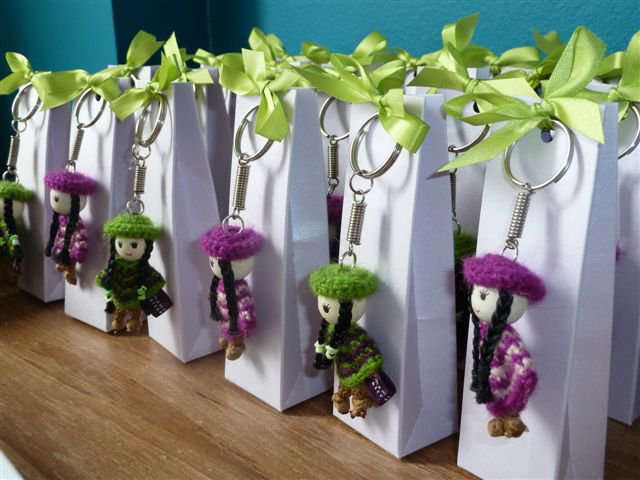 In the main hall of Brussels-Central I soon know who Barbara Brugmans is: a lady packed and sacked with colourful trinkets from all over the world. “From a search for an honest, new product, some friends and I had the idea of doing something in the baby sector. The baptismal sugar tradition in Flanders seemed to us to be the ideal starting point. Since it is not for everyone to support a good cause instead of creating a birth list, I wanted to combine Baptism Sugar and a good cause”. Not long after that, the non-profit organisation Fairytale was a fact. In exchange for a half-time minimum wage, Barbara committed herself to the non-profit organisation.

Does she apply certain criteria when looking for partnerships with foreign projects? “I don’t visit all the projects myself, often collaborations are established through meetings with people from the circuit. In this way you quickly find out which projects are permanent and evolve in a positive sense. After all, not all of them are able to bring women together, train them, produce a quality product and organise transport”.

Dolls and birds of happiness

Being dependent on sponsorship and subsidies was not an option for Barbara. That is why she decided to bring in money herself to invest it in projects. “Thanks to an acquaintance in Kenya, I came into contact with a school in Kibera, a slum in Nairobi. We made an appeal to set up a women’s group and organise the production of life trees and their transport to Belgium. I am responsible for sales and marketing. The women get a fair wage, the proceeds go to a children’s project”.

“In the meantime, I am working with six fourth-pillar organisations with projects in all corners of the world. One of them is Mama Alice, who looks after and supports street children with school arrears. Their mothers make our lucky dolls and get a fair wage for them. Thanks to their share of the family income, they gain more self-confidence and have more say at home. Moreover, the children no longer have to take to the streets to earn an income. Another partner is the Indian Opus III, also a women’s group that makes lucky little birds. The proceeds go to schools, community centres and health centres.

“Fair trade only works if you are sure that the money goes to the right people. Barbara is aware of the difficulty of this. “For the project in Kenya, a Kenyan woman on the spot is responsible for the correct payment of the women. She studied in Leuven, lives in Kenya and travels the world with her own jewellery collection. So she can assess both my needs and the needs of the women. As life there has become more expensive in ten years’ time, wages have to rise. Of course, wages must remain proportional and reasonable, so as not to damage the local economy. You could compare those women’s wages with those in Flanders and deduce from them that the gap is still very wide, but in their specific context, they are fair. We have chosen to pay the women per piece they deliver. After all, there are various factors that we have to take into account: they are almost always socially weaker women with children who do not work full-time for the project. If it rains sufficiently, they also work in the fields to make a living. To check that the other projects are paying their workers fairly, Barbara examines the annual reports and is in contact with the project leaders. 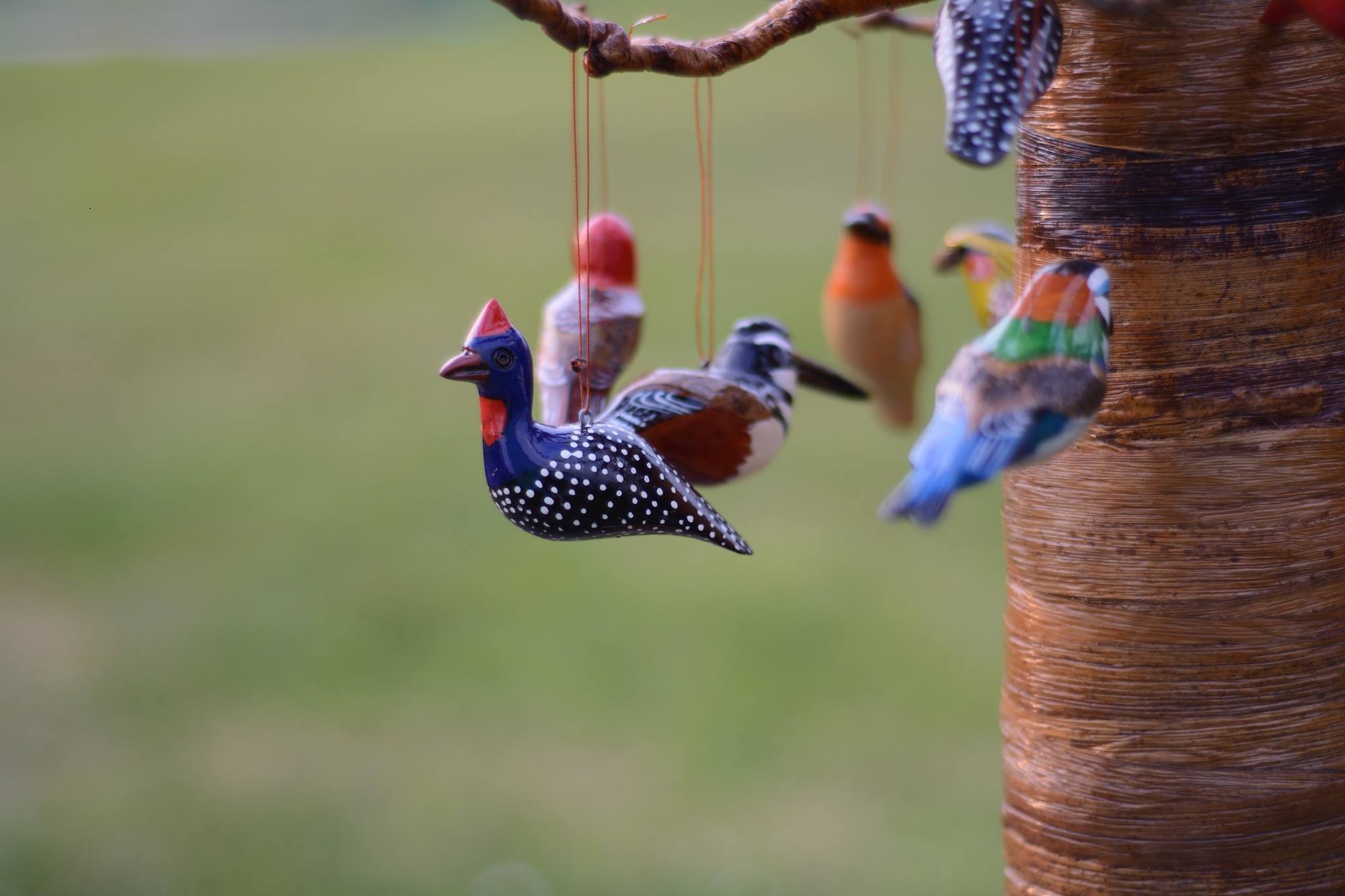 “Thanks to my contact in Kenya, everything usually runs smoothly. If she is not there, containers with crooked trees or baskets that are too small, discoloured or badly painted may arrive here…. I have to repair them all myself.  There are also sacks of baskets eaten by termites. I pay the wages, but then I don’t have baskets for my money. We also sometimes have problems with shipping the containers. Sometimes a container arrives a month later than planned. The reasons are many and varied: pirates slowing down shipping, thorough checks on containers against ivory smuggling … I accept that, but it is not good. My audience, mainly pregnant women, cannot always wait. Some order well in advance, but others do not, and that is a minor disaster.

As far as the living conditions of women are concerned, according to Barbara, there is still a long way to go. However, a lot has already improved: thanks to the project, the women are now able to send their children to school. Barbara stresses the importance of this: “By enabling their children to go to school, they are getting out of the vicious circle of poverty. I visited the project in Kenya in October 2013. The women are allowed to choose what they do with the proceeds of the life trees, we don’t impose anything on them. In the first place, of course, it goes to shelter and food. When I was in Kenya for the first time, there was famine in the area where the baskets are made. This means that people with no income, in particular, who depend solely on what they grow, will go hungry if the harvest fails. Thanks to the project, they can now make baskets and buy food at a profit. In addition, they invest the proceeds in the community, e.g. in the construction of a church. For them it is very important to have their own church. It used to take them an hour to reach the nearest church community”.

An honest product does not necessarily mean an expensive price tag, according to Barbara. “The fact that my baptismal sugar packaging is fair should not be a reason for people to buy it. It may be an advantage, but the product must appeal to them in the first place. My products are also sold in the Netherlands, where there is no tradition of baptising sugar. There they mainly serve as gifts on birthdays and other occasions. Fairytale gadgets can not only be used as baptismal sugar packaging, but for treats in general: birthdays, weddings, communions …”.

It is clear to Barbara that fair trade should be the norm rather than the exception. “Fair trade should be generally accepted and only fair products should be available on the market. Even if the current situation is a consequence of the free market economy, it is regrettable that governments are not introducing more rules or laws to make fair trade compulsory. When, in the West, you touch workers’ wages, they also rise up. Unfortunately, fair trade is still all too often associated with alternative products. Fair trade must be rid of that image.

In the future, Barbara wants to increase Fairytale’s supply and hence its market share. “In order to be able to sell more original and hippier stuff, I would like to hire a product developer. In that way Fairytale could evolve into a social entrepreneurship. If necessary, I would also like to look closer to home and join forces with socially weaker women in Flanders”.