PrevPrevious publicationKrisKras, a small actor with big ambitions
Next publicationFair Trade Connection: Because producers have stories to tellNext

Five years ago, Nancy De Poorter opened a gift shop with an online shop in Zammel, near Geel. It was during her work as a volunteer in the Wereldwinkel in Westerlo, which is more focused on food, that she discovered a passion for fairly produced gifts. Meer dan Mooi has developed from a shop selling fair trade gifts and home decoration items to a fair trade clothing shop where the organic aspect is also important. 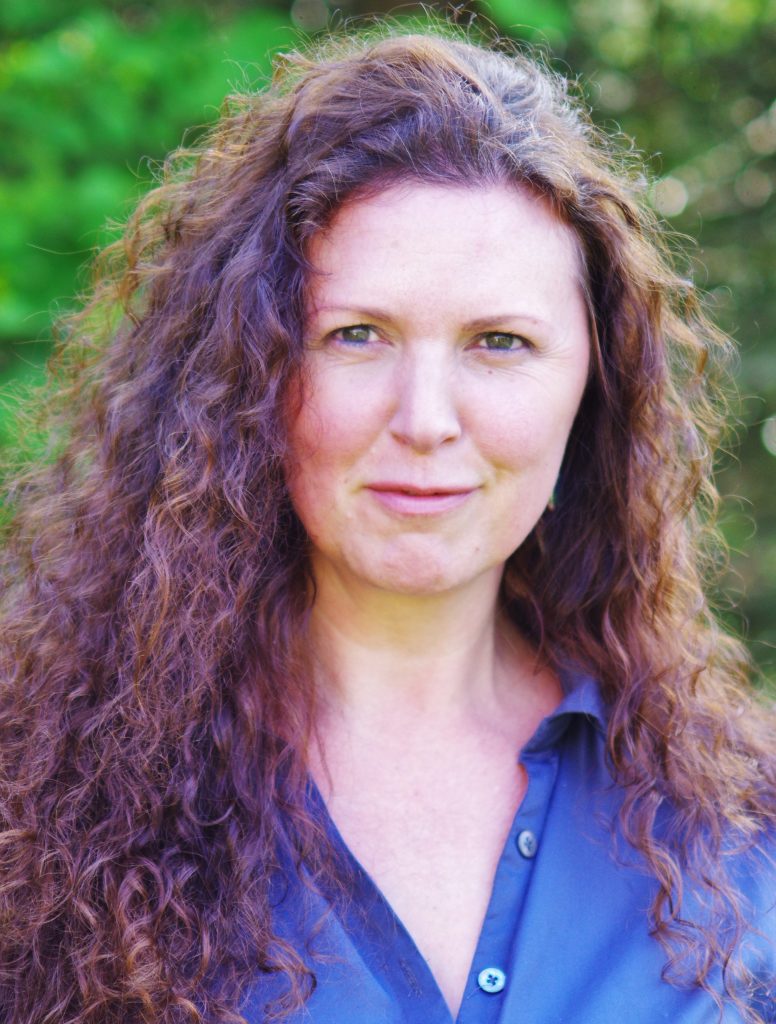 While initially Nancy didn’t want to hear about a clothing shop, she now even offers a range of men’s and children’s clothing. Why the turnaround? “I found so few beautiful, fair-trade clothes for myself that I finally decided to take the plunge myself. Sometimes I even have to hold back. For example, I once saw a very nice tea box, but then you have to sell tea too. And after the tea, you also have to offer coffee. I don’t want to sell shoes or bras either; that’s a separate job for me. But then again, sometimes I change my mind, just like I do with clothes. »

This is how the offer in the small but cosy shop slowly grew. Today you will find colourful wild silk scarves from Vietnam, timeless bags made of ecologically tanned leather from India, fine earrings from Colombia and a silver bracelet with precious stones from Nepal, as well as casual clothing made of organic cotton with the Fairtrade Max Havelaar label. This is the best-known hallmark, but not the only one. All garments have the GOTS quality mark, which stands for ecologically and socially responsible textiles. Some scarves are made of plain cotton but fair trade, for the clothing it is always a combination of both labels.

Nancy studied psychology and had a normal office job in a previous life. Having my own business was never a dream: “I just wanted to stimulate fair trade, help as many producers as possible from different parts of the world. Having my own business was not an end in itself but a means to an end”. Her mission is to make fair trade and organic clothing known to a wider audience. In doing so, she still runs up against prejudices, as if dressing fair trade clothes equals putting on a jute sack. People often have a completely different image of fair trade and organic clothing and are surprised when they see the beautiful designs. Nancy therefore selects with care: “I choose a style that is not so much alternative and avoid the typical jewellery from Nepal or the African masks. The floral jewellery from Thailand that I offer is typical for that country, but they are processed more soberly”.

Dare to take the plunge

With its Meer dan Mooi shop, Nancy also hopes to attract an audience other than fair trade aficionados. That is why she organises events, such as the annual fashion show or a scarf knotting workshop, which enable her to reach a different audience. As the fashion show is 100% fair trade and organic, so is the make-up, shoes and hairstyles. 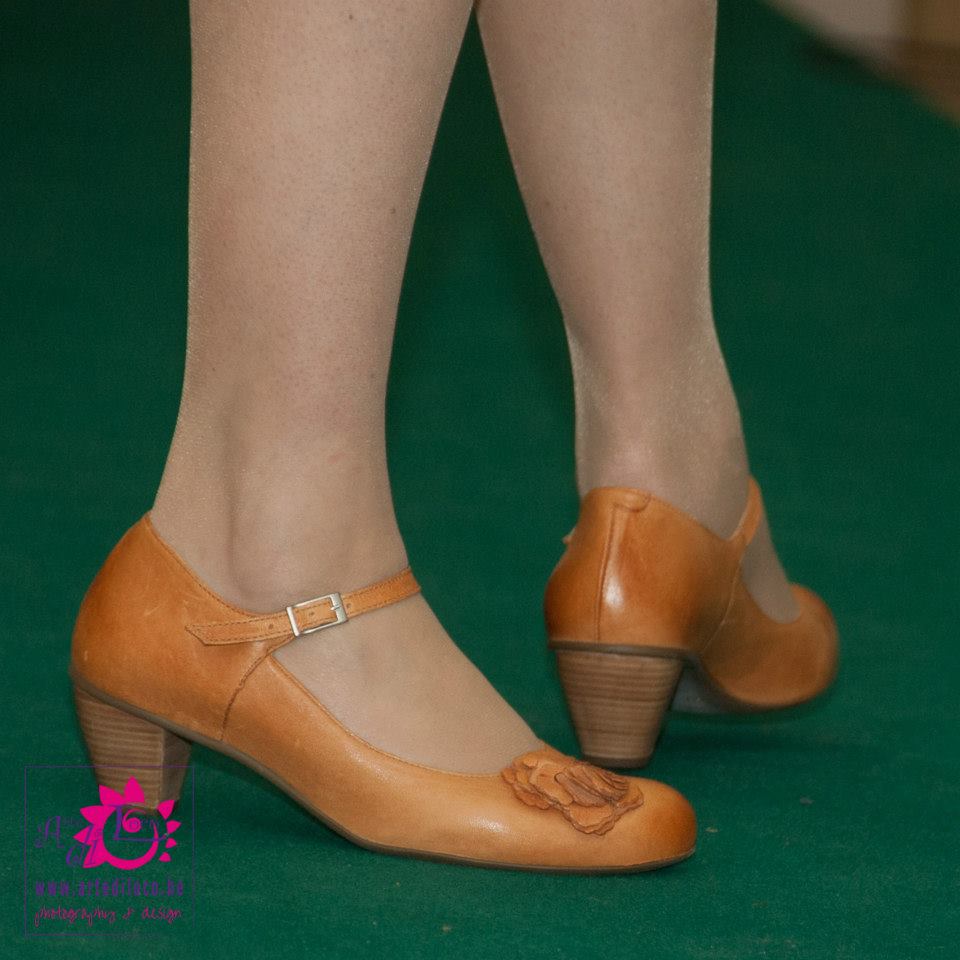 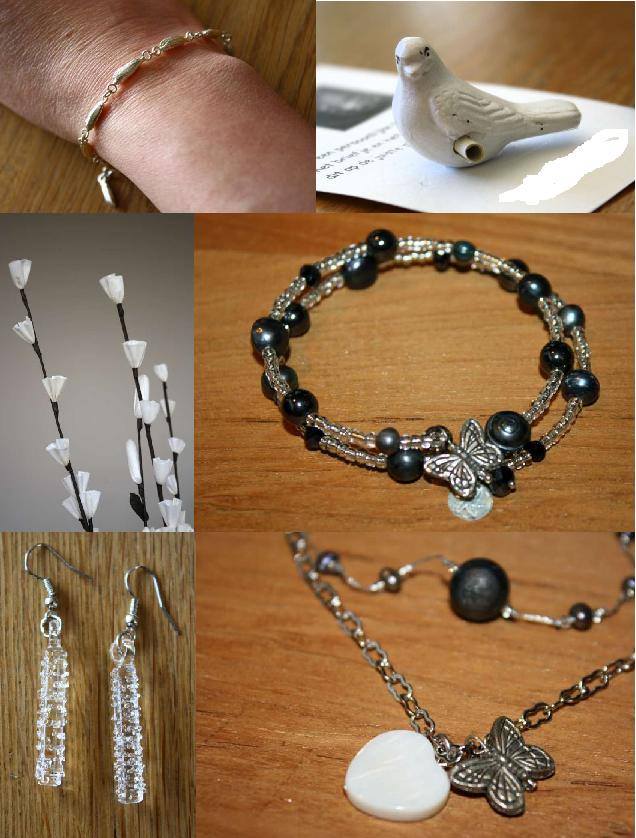 “Many of my customers have never knowingly bought fair trade products before. Local people come to the shop to buy gifts and jewellery, such as the collection of flowers from Thailand, which is unique in Belgium. When it comes to clothing, we tend to have customers from Antwerp, Leuven or Hasselt, because there is very little on offer in Flanders. Although there are online shops, customers prefer to try on the clothes. It is precisely those who buy fair trade and organic products who find it important to touch the fabrics. »

And here, the customer is king. Whether you’re just buying a little something or just browsing through the articles, you will always be welcomed and given free and fair advice. For Nancy, customer contact is particularly vital, first and foremost in the shop itself, but most certainly also via Facebook. On a regular basis, subscribers to the page have the chance to participate in the selection of items in the shop: they decide whether or not they want combi-trousers, which colour will be ordered for a particular item, or they have the opportunity to try on underwear and express their opinion in a frank manner. Before going into men’s clothing, Nancy conducted a small survey which revealed that men didn’t want prints or logos on their clothes, nor could they be too tight.

Nancy herself identifies suppliers on the Internet before approaching them. 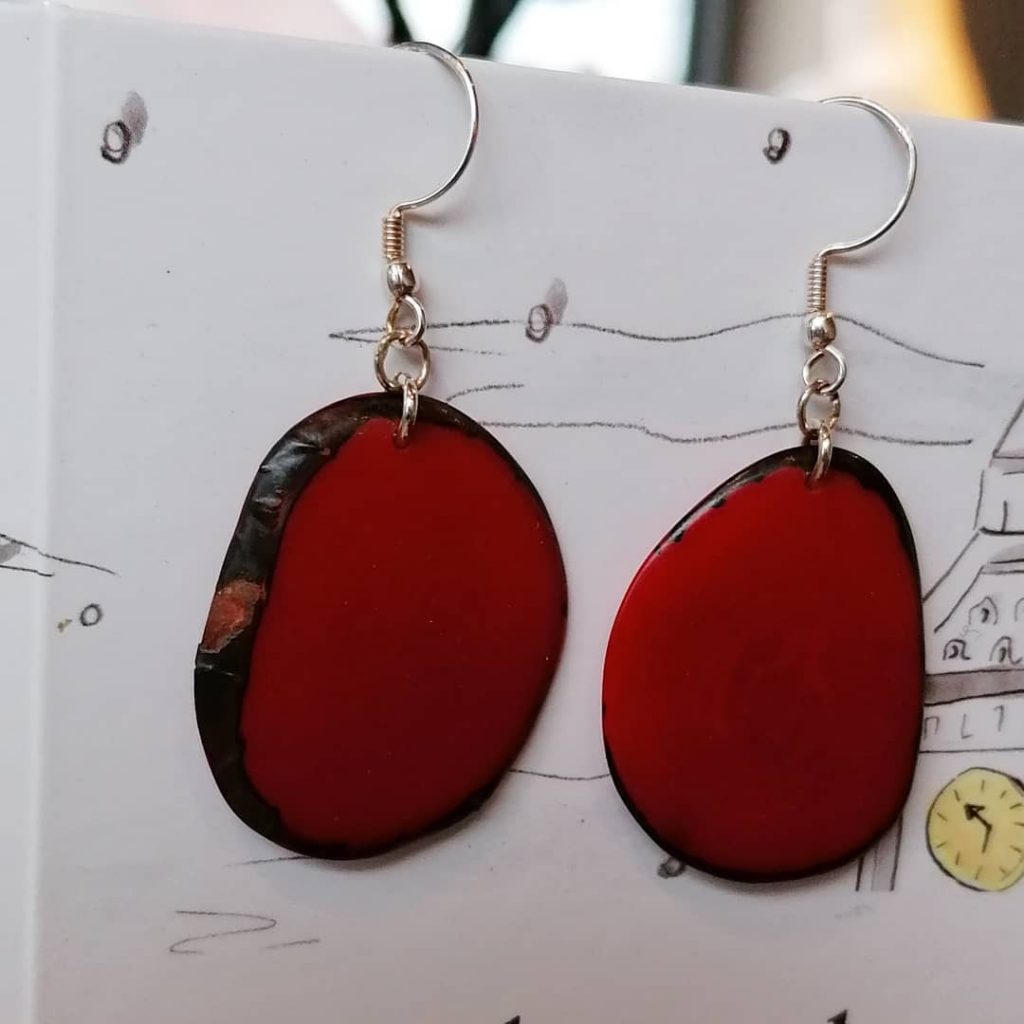 “It’s a real quest. If I find an article that I think is worthwhile, I start asking myself: what are the conditions, what is the quality level? It doesn’t make sense if it’s only a nice project, which only lasts a week. Or if the product is organic, but is made by children. It has to be of good quality, beautiful and affordable. If you offer someone two similar necklaces at the same price, one fair and one not, no one will choose the not fair. But then again, the choice has to be wide enough and above all, it has to be to the customer’s taste. The customer does not buy an item to support a project and then store it in his wardrobe. »

For Nancy, it’s important to work with an importer: “It’s impossible to work in a direct line on a global scale. If I had to visit workshops in countries where child labour is normal, they would assure me that they do not work with children. As soon as the contract is signed, I lose all control. So I trust the importers I work with, because they have been working with the same producers for years. They also look after quality: if a product is not in conformity, you can send it back to them. I would be very naive to think that I could do all this myself. In the West, there are also so many things that we take for granted: it’s a disaster, for example, when two earrings are not identical, whereas this is not the case for local producers. And try to explain to them that every piece of clothing of a certain size must be identical! »

A small step for mankind…

For Nancy, fair trade is a way of life. It goes without saying that she chooses fair trade products and food out of respect for the people who make them. “Fair trade, good working conditions, that’s an ideal, I think it can never be achieved worldwide, but every step counts. If, in a region where child labour is very common, you can achieve that two children work in a family and two go to school, you are already one step ahead. That is how the world works. Such things change gradually. As a consumer, you can make a difference: if you first look at everything you buy to see if there is a fair alternative, at least you are aware of the problem. If you buy something that is not fair trade, like a leather jacket made in Bangladesh, look at who made it”.

Fair trade is not only about fair production, it is also about trade according to a totally different principle. But it is still trade, of course. “If every trader would work a little differently, a lot would change in the world. If you know that only 2% of the price goes to labour costs, you would think that large companies would share a little more of their profit margin with the producer, but that is always cut back. The producer can easily get a higher remuneration without the product becoming much more expensive. And if big clothing brands stopped working with ‘unfair’ producers, then everyone would just buy fair trade products”. Indeed, a big step for mankind. 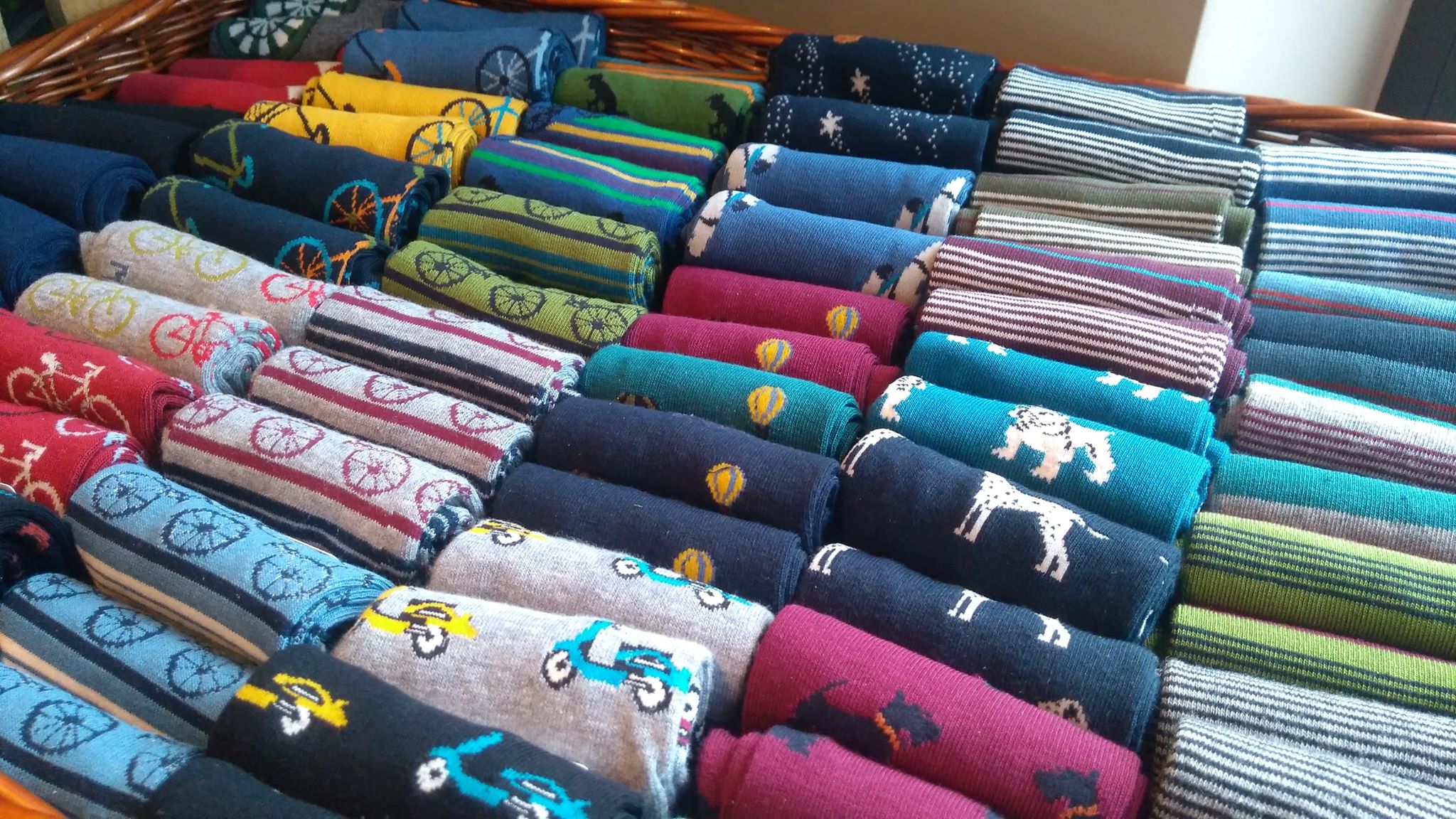 © Meer dan Mooi
Photo 1: Nancy de Poorter
Photo 2: Torfs shoes on the parade of 2014
Photo 3: Jewellery from Thailand. The bracelet top left is made of silver plated rice grains. The carrier pigeon is traditionally made in pottery and contains a note for a message. The artificial flowers are made from s’now, a water plant. The jewellery with the butterflies has black freshwater pearls, a silver butterfly and (with the necklace) a shell heart. The earrings at the bottom left are made of glass.
Photo 4: Ivory vegan earrings
Photo 5: Bamboo socks from Thought (Netherlands)