Aba Sholi in Rwanda produces internationally recognised coffee. Thanks to the help of Valérie Vangeel, one of the coaches at Enabel’s Trade for Development Centre, the cooperative has made a lot of good progress. They’ve learnt how to optimise their costs, guarantee the excellent quality of their coffee, and help their members in the fight against climate change. The cooperative has also improved its infrastructure and been able to attract more members.

Even though it is not a product consumed locally, and even though the country, with its 15,000 tonnes destined for export, is a ‘small’ exporter compared to the 385,000 tonnes exported worldwide by Kenya, 400,000 Rwandan families make a living from the cultivation of coffee, introduced by the Germans at the very beginning of the 20th century.

The Aba Sholi cooperative is located in the Muhanga region, previously called Gitarama. Known locally for its prison, Muhanga is both the second biggest town in Rwanda and the administrative capital of the eponymous district in the Southern Province of Rwanda. One hour from Kigali, on the road to Butare, the Aba Sholi cooperative is built around the plantations that serve its production. 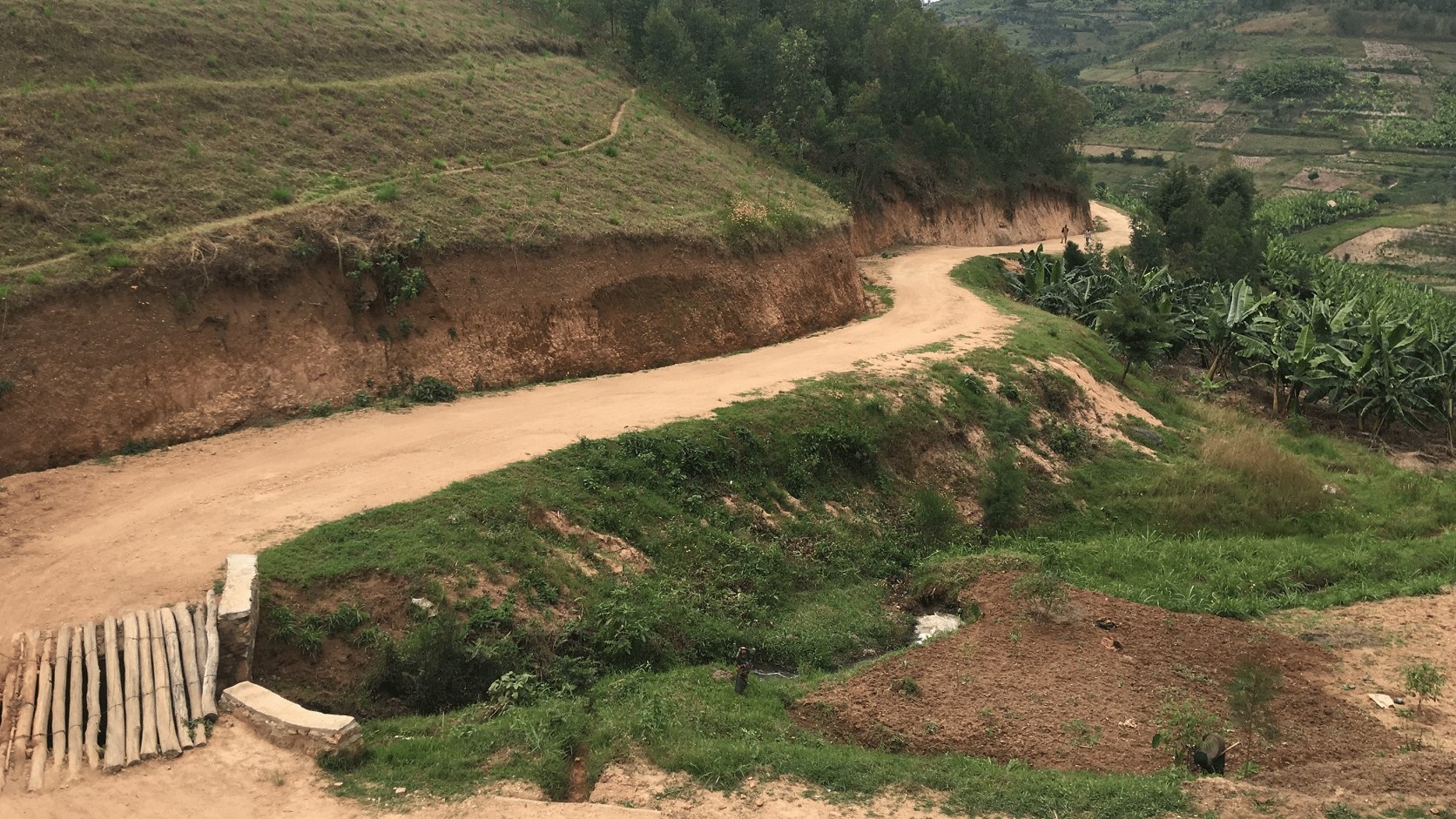 After reaching Muhanga, you still have to drive a good half an hour “because they have really put themselves at the heart of coffee culture,” explains coach Valérie Vangeel, who has been there four times in three years. “On the way, you pass through a lot of the small villages they’ve helped, by building healthcare facilities for example.”

A cooperative with a really positive evolution

When you arrive, Aimable Nshimiye, director of Aba Sholi, welcomes you for a tasting or a tour: “The coaching with Valérie from Enabel’s Trade for Development Centre between 2017 and 2019 really helped our cooperative. You can see the effects, not just in the marketing tools we now use on a daily basis to present the cooperative to buyers – the website and its updates, social networks and the posts we publish, brochures that help our partners get a better understanding of our activities, etc. – but also in our ways of working. Our accountant, for example, now has access to knowledge he didn’t have before. I myself have learned a lot about strategy. I learnt to work on vision, how to focus on goals, improve our competitiveness and build a professional network. I didn’t necessarily understand all of these elements of marketing strategy before.” 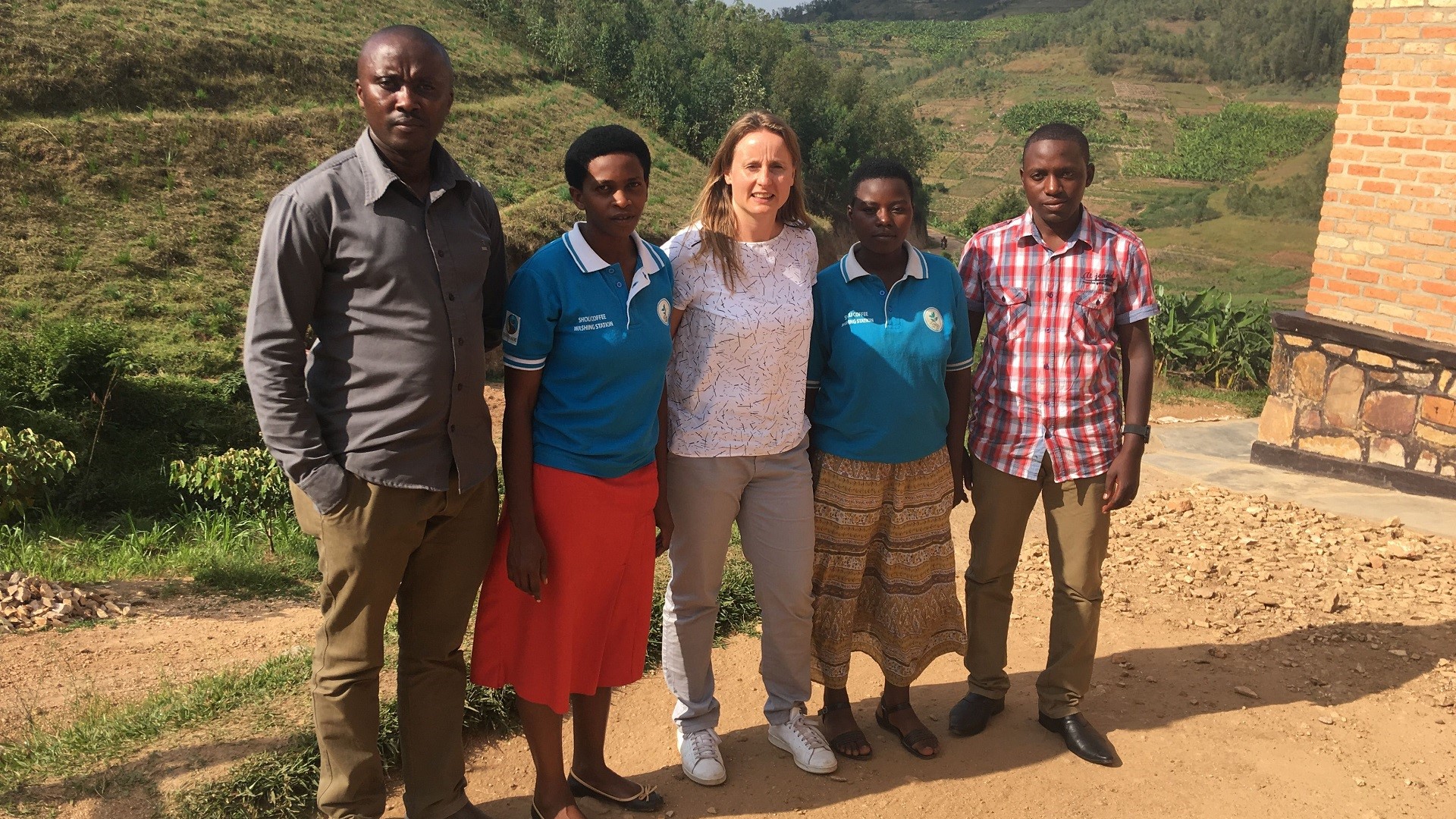 To increase their profit margin based on the advice of the coach, Aba Sholi is considering how to optimise its costs. “To improve the volume, we needed to attract more members, but the yield of the coffee plants also needed to be increased by encouraging producers to use better ways to cultivate the plots. To increase the price per kilo, we explored various different approaches: improving the quality of the product, which has since become organic, and improving the marketing and storytelling around Aba Sholi’s coffee.”

The quality of the coffee cherries and of the treatment and washing process have increased in recent years thanks to the very important role of one member of staff: the production and quality manager. “They have a real production and quality manager who is very critical. Aba Sholi receives awards for the quality of its coffee. The cooperative checks the quality of production and gives its members the responsibility so there are no unpleasant surprises during delivery,” explains Valérie Vangeel. “We worked on this aspect in particular during the coaching: the coffee had to be flawless and we had to achieve a reduction in production costs.” In 2018, 100% of the so-called ‘first category’ production was destined for export via nine separate, mainly European customers. Even though this figure may have fluctuated since then, the vast majority of production is still aimed at the international market. Next, the producers started to diversify. “The idea is to produce more than just coffee, in order to not become too dependent on this.”

Aba Sholi is also helping its members become more resilient to climate change, and in particular to the floods which are increasingly affecting the region. The monitoring of production has evolved in this sense: “Here, the objective is to try to lose as little production as possible.” explains Aimable Nshimiye. “We plant differently, with other, complementary varieties of trees, to prevent erosion. We also use compost to be more sustainable and resilient. In short, we are putting in place various plans with the help of a Kenyan expert who has already been able to visit us 4 or 5 times.”

For Aba Sholi, climate change is already making it difficult to maintain the excellent natural quality of its cherries grown at height, a major selling point of the cooperative.

The infrastructure has also developed well over the ten years of the cooperative’s existence: “The first time I came in 2017, there was mainly just an office, a storage barn and a few drying tables for the cherries,” recalls Valérie Vangeel. In 2018, with the help of a Dutch NGO which subsidises them, Aba Sholi built a laboratory to be able to roast the coffee directly on site, receive buyers and organise tastings. Their infrastructure also includes a washing station and the machines needed for the treatment of wastewater from the flotation tanks, infrastructure which has gained them certification. 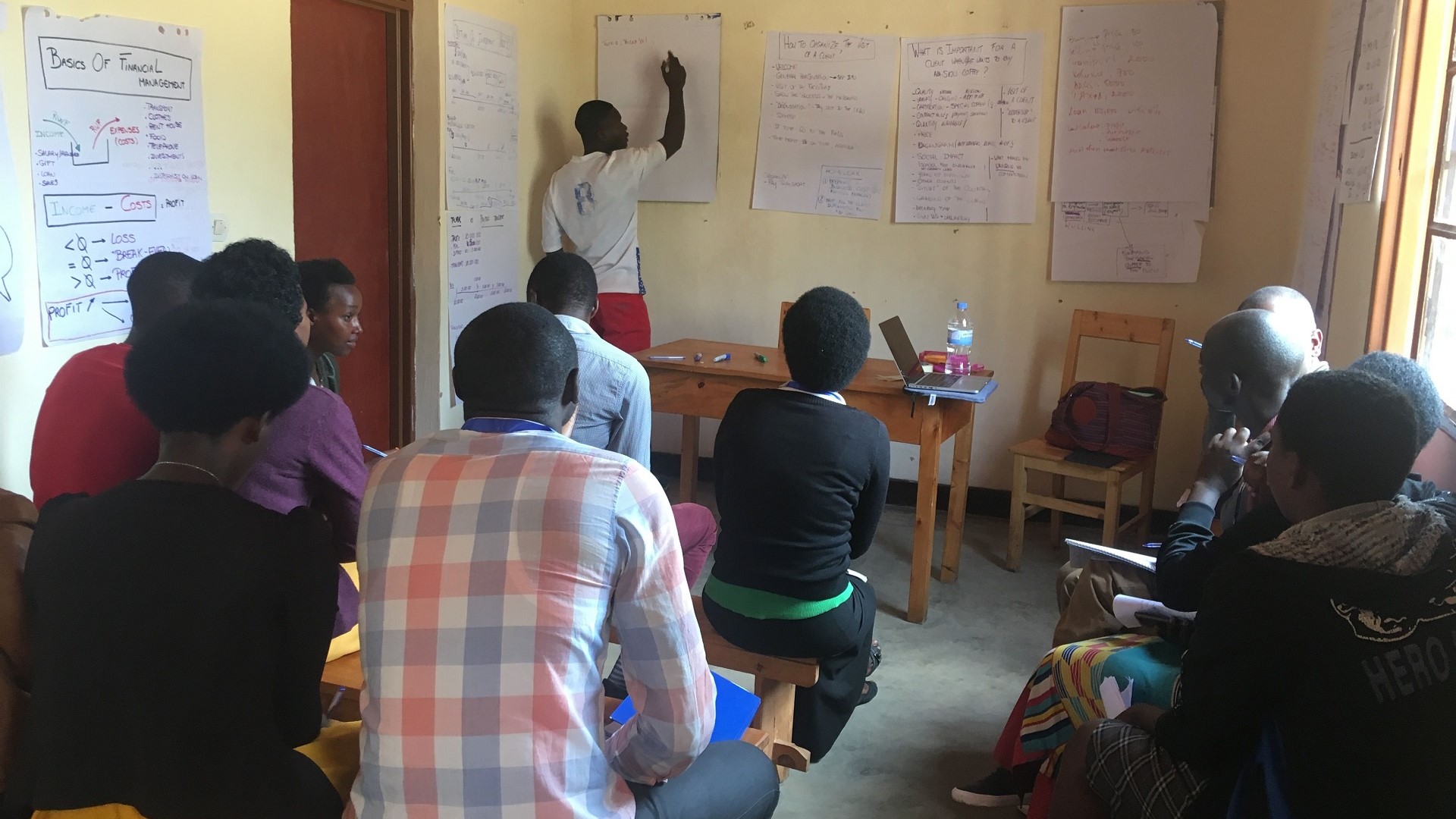 Let’s not forget about customer service. “During the coaching, we also asked ourselves how we could keep customers happy. By improving delivery times, for example. By having more precise forecasts on the quantities available for sale. All of this was put in place with a lot of planning. Then, when it comes to exporting, there is a lot of paperwork. The administrative follow-up has become flawless here.”

Looking after the well-being of its members

In just a few years, the number of members affiliated with the cooperative has increased significantly, from 334 members in 2017 to 600 today. From four employees in 2017 (director, accountant, production and quality manager, and cashier), the cooperative has grown to 21 people. Meanwhile, the board of directors is a good example of inclusion as several women are in positions of responsibility.

In addition to the healthcare facilities in the villages, mentioned above, the cooperative offers micro-credits, health insurance, savings plans and other social benefits for the community around Muhanga. And it doesn’t stop there. Aba Sholi also has a payment policy that takes care of its producers: “Aba Sholi doesn’t wait for the coffee to be sold to buyers before paying its producers. It pays them on delivery, which gives them a better cash flow,” notes Valérie Vangeel. The cooperative borrows the money to buy the cherries. In November it also pays a bonus, which is distributed among the members.

Attention to detail from an entire cooperative

How does Valérie reflect on her experience with Aba Sholi? “At first I was quite surprised. When I asked a question, everyone looked at the manager. We started out as a team of four and ended up with nine people, because the manager was able to adapt his management style. Historically, it was very hierarchical, but over time the staff became empowered, which isn’t easy. Achieving collective trust requires effort from everyone.

The issues that we were talking about (volume/price/cost) have been taken up by the members. For example, the women in charge of sorting are aware that their work will have an impact on the price of the product. This makes it possible to collectively reflect on costs and to reduce them by making changes at the various stages of the production chain. Several people also practised welcoming a buyer.” These changes in culture within the cooperative have translated into the price of the coffee, but not just that. “I have seen some producers applying these tools to the pineapples they sell at the local market. It’s a snowball effect!” 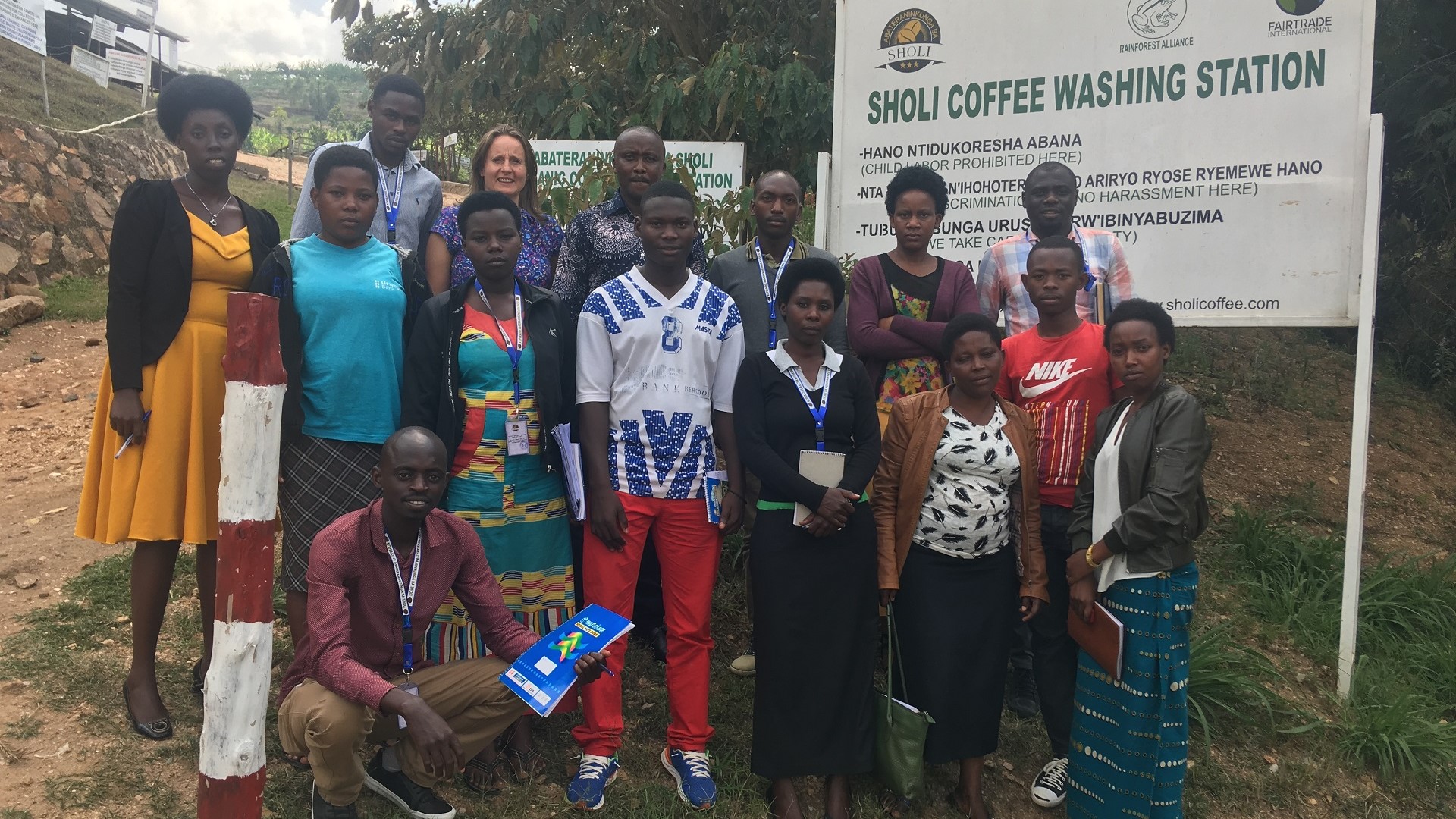 For Aimable Nshimiye, the coach’s visits, her flexibility and the implementation of a work schedule made a real difference that could not have been achieved through online coaching: “I improved my self-confidence when dealing with buyers. At trade fairs this makes a world of difference.” Valérie Vangeel confirms: “It is not just a question of communication tools, even though these are essential; it is also a new attitude.”

The specific characteristics of the TDC coaching have had a real effect here: “Going from the individual to the collective and raising the awareness of the entire team who can take over from management, this has a real impact. This changes the way buyers look at them: the financial manager talks to them about finances and the quality manager shows them the washing station.”