The price does not reflect our work

What brings together farmers from the North and from the South of the globe? Doubtlessly they share more than one would believe at first sight. Beside their love for the land and fight for a fair income, Nathalie and Djakaridja tell us that our food system depreciates the role of farmers, women and men alike.

She is a farmer in Belgium; he is a farmer in Côte d’Ivoire. When asked about their findings after sharing their farming experiences, Nathalie van den Abeele, a produce farmer in Brussels’ Green Belt, is a waterfall of words: ‘We are too individualistic in Europe. There is no collective action anymore. When a problem arises, we suffer it alone.’ It is a cry of anger combined with a desire to laugh (bitterly) at Belgium’s ‘L’union fait la force’ motto: ‘There has not been any kind of union for a long while,’ she adds. 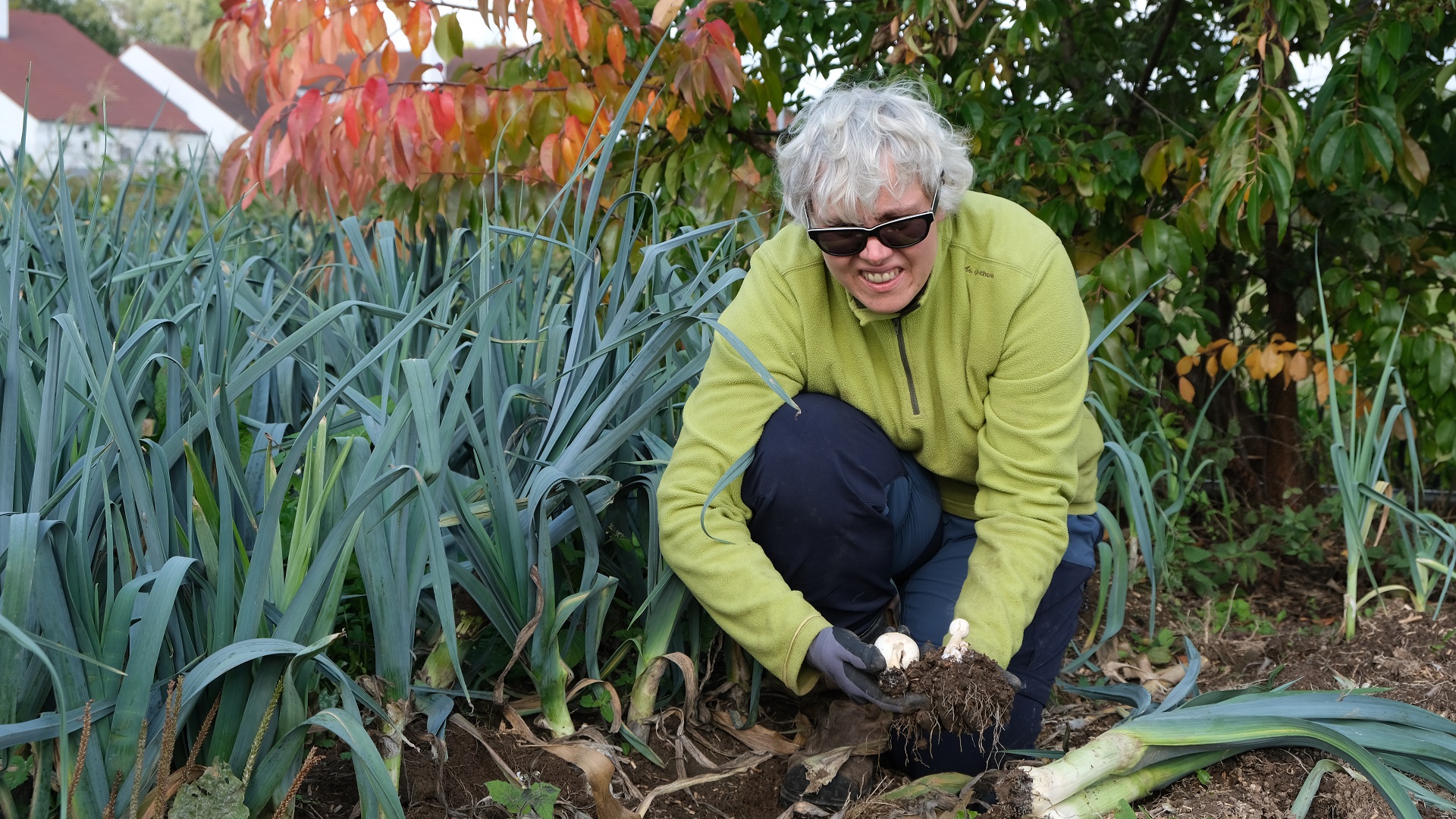 Nathalie is really angry, owing to an accumulation of issues: ‘Last year, I broke my wrist in the middle of harvesting. I couldn’t do anything.  If this happens you stand to lose everything because you earn no income and can’t afford to pay a replacement. I was able to rely on the incredible solidarity of my ‘basket buyers’ whose help was admirable: this project fosters collaboration and breaks with individualism.’ Nathalie is not in an incubator phase like some other produce growers in the Brussels region: ‘I only live off my sales. I am independent.’ According to the Producers Board, the gross income of Walloon farmers in 2016 amounted to 9,603 euros, i.e. 800 euros/month. The average for the years 2015, 2016 and 2017 amounted to 14,228 euros gross income, i.e. 1,185 euros per month. Brussels farmers are likely to earn about the same. This comes down to an hourly salary of approximately 5 euros. ‘My husband has a paid job. That is why I can survive and do this work,’ she admits.

This year this produce farmer faces a new issue: ‘we are confronted with large-scale theft: tomatoes, bell peppers, etc. Our greenhouses were looted.’ Also vegetables are stolen from the plots: ‘Red kury squash, courgettes, kohlrabi, fennel and Chinese cabbage have been stolen. I now fear for the leeks, which take up 6 months of work,’ she tells us as she shows us around. Theft has been an issue for a long time on these plots: ‘I could live with petty theft by people who needed the food for themselves, but now, things are different. They come with many and take everything. I am convinced they sell this on the market.’

Does a farmer from Côte d’Ivoire like Djakaridja Bitie suffer from theft too? ‘Certain farms used to be confronted with theft. Mostly at night, when beans were gathered for drying or when full bags were waiting for transportation in front of the warehouses. But we launched a cooperative model and hired guards.’ This joint solution has really helped in the fight against theft. 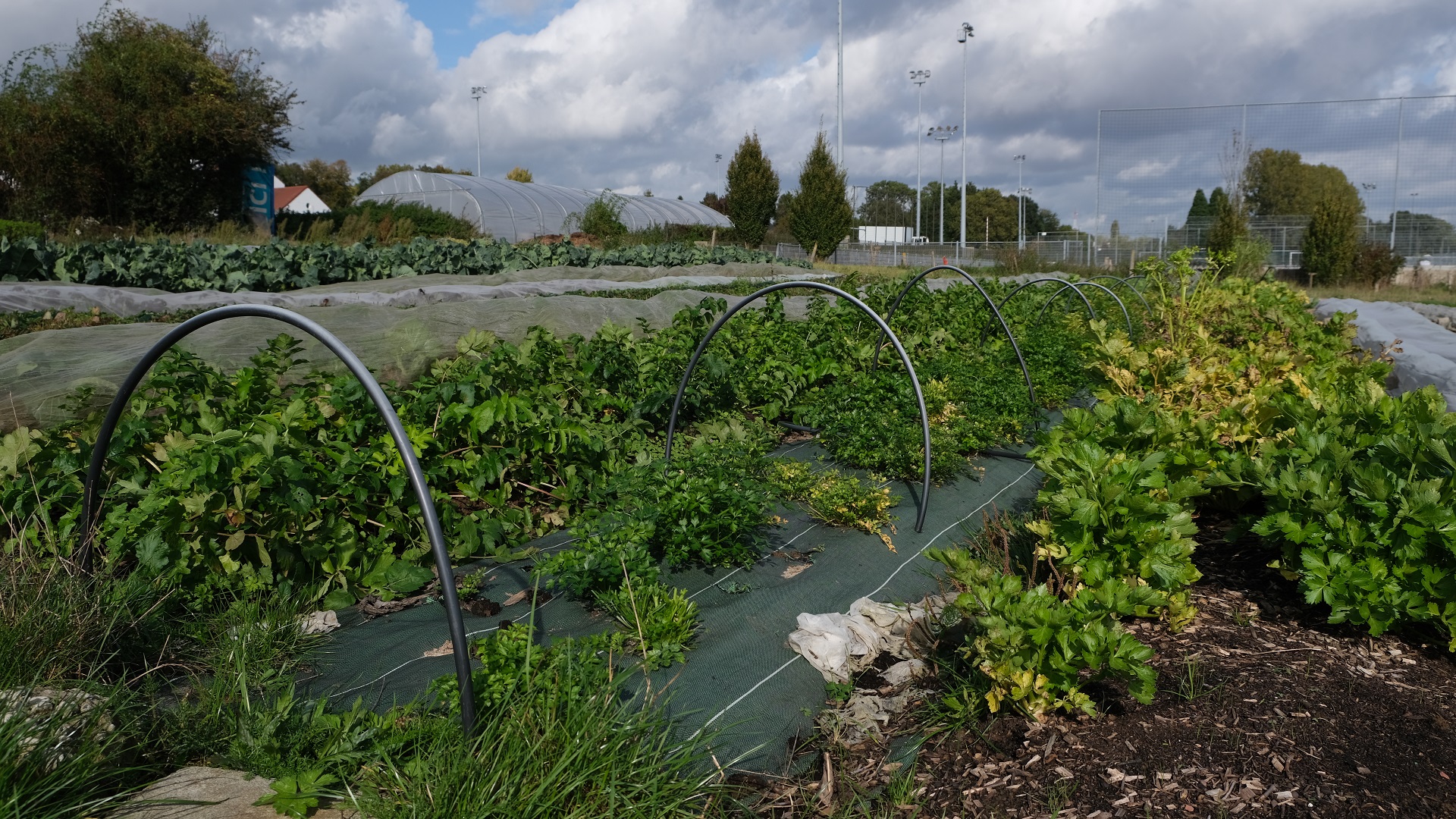 Nathalie has not figured out yet how to solve her problem. She sells the whole of her production as organic baskets which are picked up by households who may show sympathy towards her loss for a while. She also counts on them when she cannot manage the fieldwork on her own. ‘I rely on my clients. There is no other solution. It is the principle that I have put in place: organic baskets imply a helping hand on the farm.’

Contrary to what one could imagine, many clients like participating in the life of the land which feeds them: ‘They enjoy working on the land. It is part of returning to nature, it is something people can hold on to, it may even help people who do not feel well or who feel depressed,’ declares Nathalie.

Djakaridja is also seeing people wanting to reconnect with nature and themselves: ’I see friends, civil servants and city neighbours ask me if they may visit my plantation. They are looking for harmony. The land regulates one’s emotions and, personally, since I am more and more away from my fields because of my work in the cooperative, I miss the countryside. But when I am among my trees, I feel invigorated,’ he entrusts us. ‘All farmers love their work,’ conclude the two in mutual understanding.

“A farmer does not earn much”

What brings the two of them closer? Of course, they share a passion for the land. But they also face the same issues: ‘All smallholder farmers face the same challenges,’ explains Djakaridja, ‘The fruit of our work is not paid fairly.’ Nathalie joins in: ‘We all want to eat a salad, but the person who makes the salad is not paid correctly. Also, authorities are not aware that agriculture could solve unemployment.’ Djakaridja agrees: ‘In my country, agriculture is one of the biggest employers, but more and more youths quit. The cocoa price is too low; it is fixed without taking into account the production cost. Many youths don’t want to take over their parents’ plantations,’ he confirms.

Yet, when Djakaridja visits a supermarket in Belgium, he notices that minds are changing: I see so many labels; many consumers want to make a difference when purchasing a product from the South. But the big dinosaurs, the intermediaries, get it all. These intermediaries say that high prices are for a reason, but in reality, they keep the benefits for themselves.’

Nathalie agrees: ‘In the past there were few organic shelves, but Lidl, Carrefour, etc. now all offer organic produce, but… from an organic farm industry! For us, smallholders, even though we offer better quality, getting a better price for our vegetables is complex because we do not weigh enough compared to farms producing larger volumes. I have a hard time finding solidarity-driven clients for my baskets. People who are willing to help in the field and get involved in the project. People think they are doing well by checking the labels, but matters are more complex than that. A retailer purchases heads of lettuce at 59 cents and resells them at 1.5 euros. But even if they deliver at home, they offer minimum margins to the farmer.’

“The price does not reflect our work”

In this ultra-competitive setting, smallholder farmers are pushed to take on new responsibilities. ‘We not only work the land; we must also take on marketing, communication and other roles,’ says Nathalie, ‘It is really tough. I raise awareness and sometimes I have the impression that I am fighting windmills.’ She tries to explain that the price of produce in the supermarket does not reflect the work that went into the product: ‘In the past, the price reflected weather conditions: but this does not apply anymore. This year, I had a poor tomato season, but I had to sell the few tomatoes I harvested at global market prices. Just twelve kinds of produce dominate our supermarket shelves and they do so throughout the year. Food has become a stock exchange commodity. For us, that does not work at all. We produce with a view to feeding people; not to put an abstract value on food,’ she adds while her temper rises.

‘It is even worse for us,’ reacts Djakaridja, ‘The prices are fixed on the London Stock Exchange. We have nothing to say in this. Nobody bothers about our production costs. They are never discussed with the producer. But there are consumers who stand up against this system and some value chains have adapted the model like our partner Tony’s Chocolonely, which purchases our cocoa under the Fairtrade label and pays an extra premium on top. But the big players of the agro-food industry are hard to move and they cannot be easily taken out of the value chain. In the end, we, the smallholder cocoa producers, barely receive 6% of sales prices.’

Power with the consumer

What should we do? For Nathalie and Djakaridja power is (at least partially) in the hands of the consumer: ‘First of all, consumption patterns have to change. In Switzerland, people buy very little meat, because meat is expensive. They buy their meat from small butchers; they support local farmers,’ says Nathalie, ‘We must return to more direct purchases and short circuits.’ 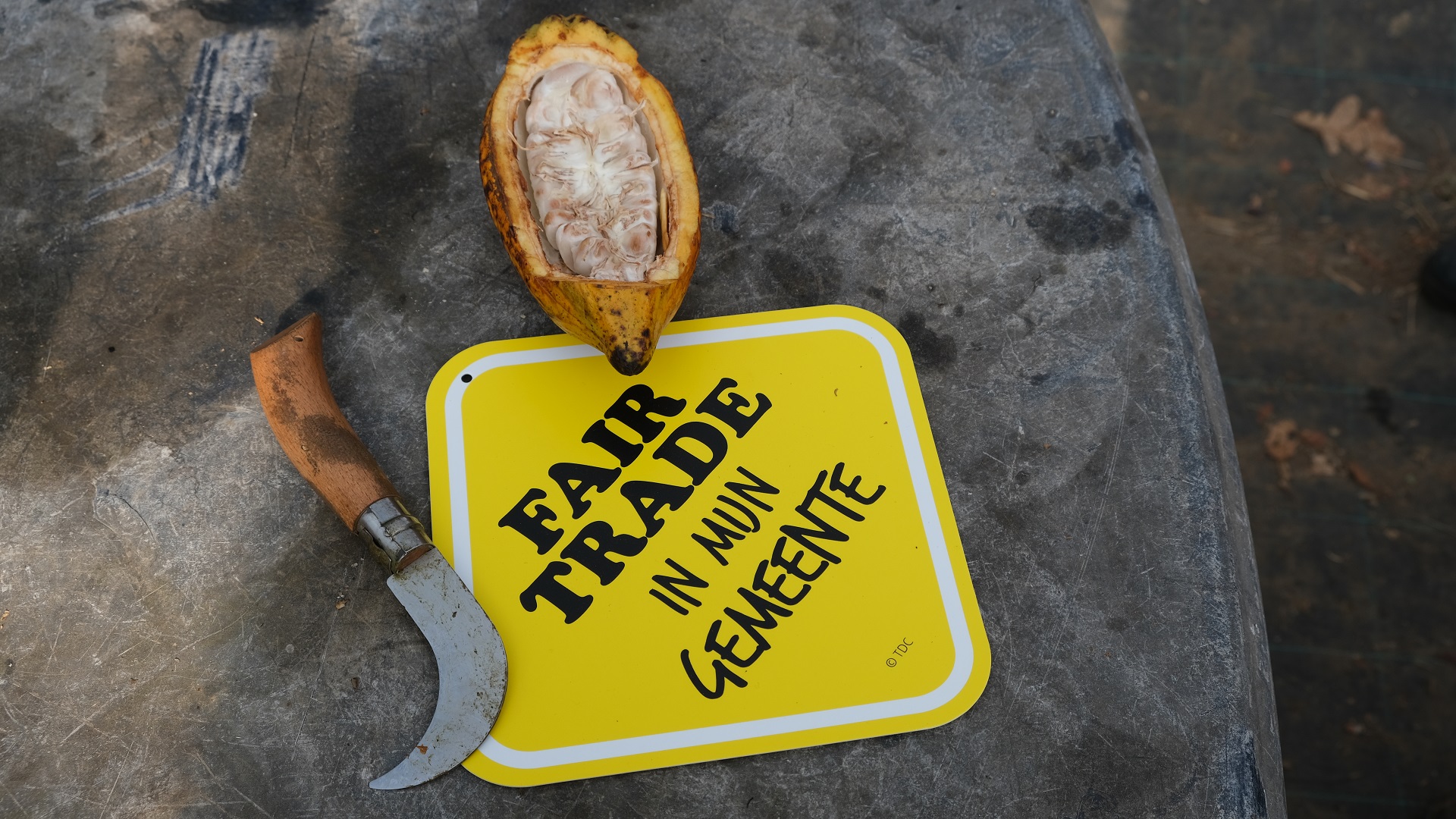 Djakaridja agrees: ‘We add new labels every year, so in the end people don’t know what to believe anymore. Chocolatiers should be asked about the living conditions of producers and tell them who earns what.’

Nathalie explains that she is facing another challenge: access to land. ‘I was fortunate I was given a pilot plot for three years, but I had to leave it afterwards. Land has become extremely rare. In Wallonia, you pay 80,000 euros for a hectare and in Brussels there is hardly any land anymore. A prison will be built on the best endives land in Europe (in Haren). The best arable land is expropriated! Soon, we won’t have land for cultivating food anymore.’

In Côte d’Ivoire, issues are different: ‘Access to land is not so much of an issue. But farm practices are an issue! When trees are too old, everything is cleared and nothing is protected,’ tells Djakaridja, ‘We now have a sustainability programme in place using agroforestry by which we regenerate land and show that old cocoa parcels of land can still be very productive: We tell producers that the trees still store nitrogen in the soil and feed the soil and that extra revenue may be obtained from these trees.’

But, for now, in Côte d’Ivoire, farmers who respect soils and the laws (not clearing protected land or using child labour) are not compensated for doing so: ‘Everybody ends up in the same box, even though we do not have the same quality. That should change. The real challenge for us is traceability: We encourage consumer representatives to come and see how cocoa is processed throughout the value chain.’ Right now, hardly one third of the whole production of the cooperative of Djakaridja is sold as fair trade cocoa. This, according to him, is owing to the fact that all cocoa is put in the same box because of a lack of traceability. 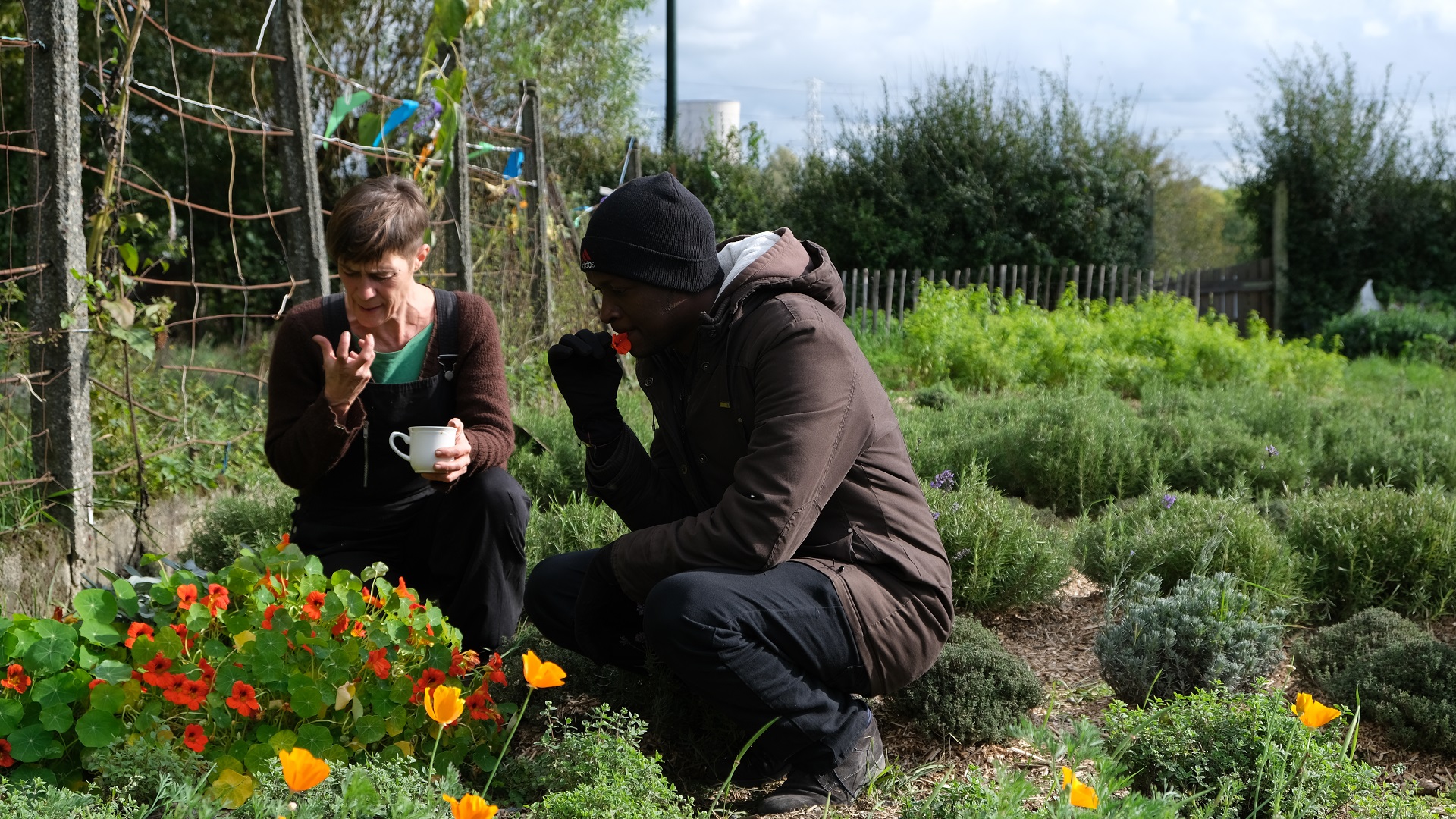 The discussion then continues on what should be put in place: questionnaires for consumers to find out about their opinion, consumer information about the prices, or charters protecting the producer, which are signed by everyone in the value chain and which consumers would guarantee. Now, supermarket retailers control everything and decide about margins: ‘The farmers are made to compete with each other and quality suffers accordingly,’ says Nathalie; and both of them evoke the milk crisis. Europe still produces far too much milk, which is then dumped on the African market in the form of powdered milk. In Africa this hinders the emergence of a local dairy industry.

Nathalie refers to a positive initiative inspired by a French initiative: “Who is the boss?” sells products to supermarkets that respect the producer’s margins. Djakaridja remains optimistic and insists on increased awareness displayed by chocolatiers such as Oxfam, Ethiquable and Tony’s Chocolonely: ‘Some work with cocoa producers and pursue direct trade without intermediaries. This trend is on the rise among consumers as well: consumers purchase more and more fair labelled products which offer premiums to producers to improve living conditions.’

During the Week of the Fair Trade 2019, Ivorian cocoa producer Djakaridja Bitie visited local Belgian growers in Anderlecht to exchange ideas and experiences. This meeting showed that farmers in Belgium and in the South face similar challenges: The price they get for their product is often very low and consumers underestimate the labor that is rioting in growing fruit and vegetables.