PrevPrevious publicationA produce farmer and a cocoa grower share views on the difficulties they face
Next publicationMiel Maya Honing: for a sustainable and fair ‘happy culture’Next

Every year, we pick a different, clearly defined, target group. And we come up with an original activity that specific group finds fun and inspiring.

For many years Ecolife has helped a variety of businesses and organisations to be sustainable in their sector of excellence. Ecology is their principal focus. ‘But we actually combine ecology and fairness,’ says project manager Ingrid Pauwels. It is why Ecolife provides its expertise during the Fair Trade Week to promote fair trade in its home town of Herent.

What does your campaign consists of?

‘We launched an initiative with the town’s seven primary schools and had them switch to sustainable sportswear. We visited these schools during the Fair Trade Week. A short play told the children how clothes are made and where they come from. A huge T-shirt illustrated how workers making such outfits only obtain a tiny share of what is paid for the piece of garment in a shop. It made it clear to children that something is not ok in the supply chain. And they were eager to find out how things could be done differently. Behind the screens we worked with school principals and teachers and looked for sustainable alternatives for the sports class outfits.’

‘In fact, we pursued last year’s approach further. At the time we also focused on clean sportswear, but we targeted sports clubs from Herent. Two of the three clubs that were approached at the time now use T-shirts of brands affiliated with the Fair Wear Foundation. For competition outfits, basketball jerseys for instance, there is no real sustainable alternative yet apparently. Even though some major brands that offer such outfits take initiatives, they are quite poor if compared to certification programmes offered by GOTS, Fairtrade or the Fair Wear Foundation.’

Why do you organise this campaign? 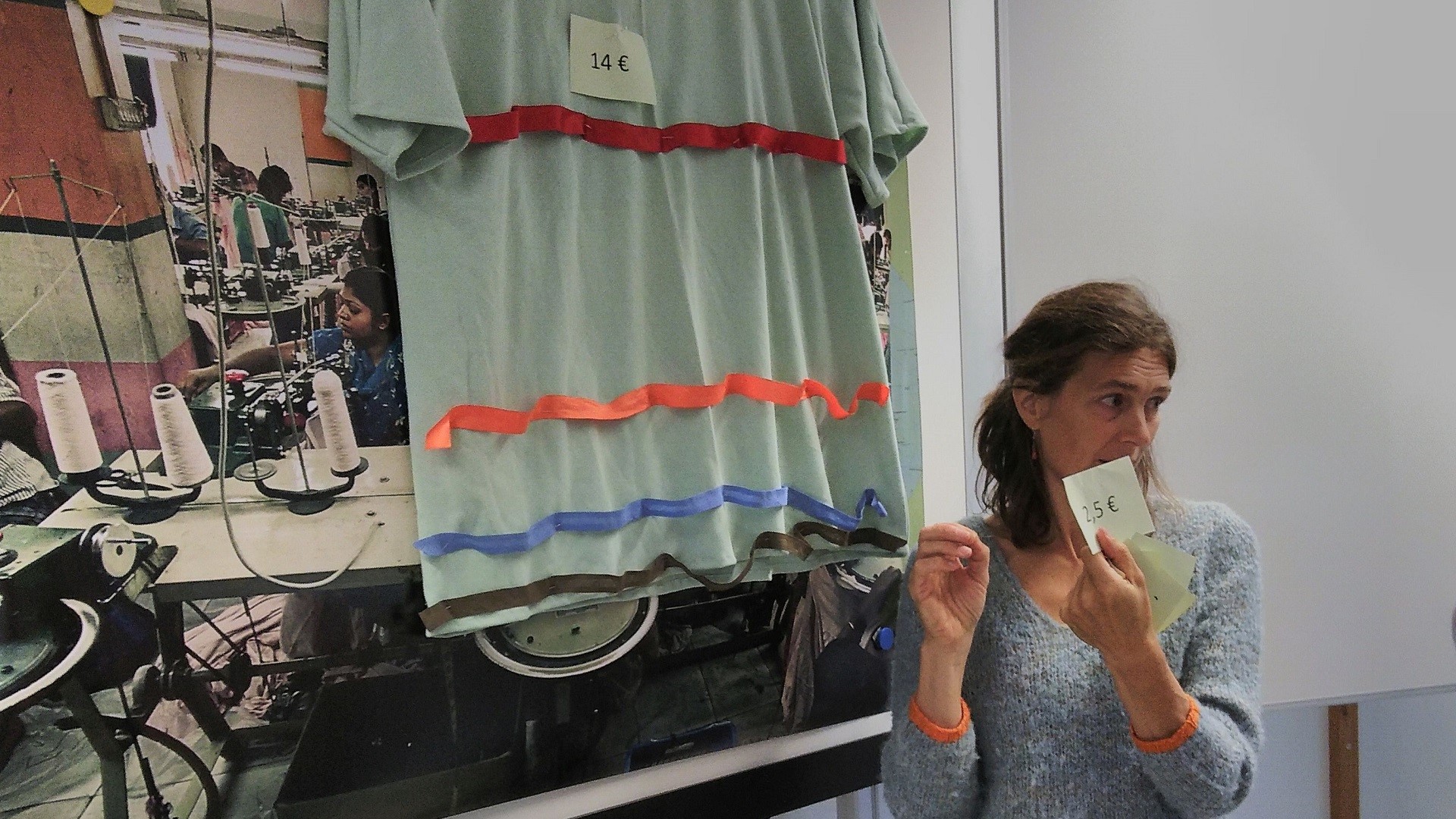 ‘Ecolife primarily focuses on ecology, but you cannot disregard the social aspects in such an approach. That is why we participate in the Fair Trade Week every year. If you really want to be sustainable, you must consider the impact on the environment as well as on people. For instance, organic cotton cannot be considered sustainable if child labour is needed to produce clothes, or a correct income does not change much if labour conditions are unhealthy.’

‘For us, the Fair Trade Week is an ideal moment to promote sustainable alternatives. We always look for a concept that triggers people to join the movement.’

Ecolife is participating in the Fair Trade Week for the fifth time. Has anything changed this year?

‘Every year, we pick a different, clearly defined, target group. And we come up with an original activity that specific group finds fun and inspiring. This allows us to formulate the underlying messages appropriately for the people we target.’

‘Even though this is the second year in a row we are focusing on fair wear, which we will also do next year, the target group and approach differ. The years before, we did very different things. A few years ago we organised a bicycle tour with more than a hundred members of the local youth movements. The tour had three stops: the local world shop, a You-Pick farm and the town’s North-South service. There we talked about ecological tourism, which was linked to our town’s city partnership with Cobán in Guatemala.’

‘Another year, we raised awareness among Herent’s municipal staff about fair wear. We looked for and found fairtrade-certified alternatives for the Technical services’ workwear. We presented this with a fun quiz to the municipal staff.’

‘In 2015, we organised the Fair Trade Football Cup with the local KFC Herent club. During the tournament – played with fairtrade-certified footballs – players were familiarised with various fair trade products. It provided the club with an ideal opportunity to launch fair wine and coffee in its canteen.’

Do you work with other partners?

‘Definitely. All our projects involve partner organisations and we always look for partners. Our experience shows that the biggest impact is achieved through partnerships. We always look for people with the required local contacts and people who know the tricks of the trade.’

‘Of course we’re not experts in all aspects of fair trade which is why we work with people and organisations who are. When are clothes really ‘fair’? What is the difference between various sustainable labels? We asked these questions last year to the We Social Movements (WSM- formerly Wereldsolidariteit, ed.). Thanks to their Clean Clothes Campaign they know everything about fair fashion.’

‘For the sustainable sportswear campaigns we were assisted by three famous local sportspeople from Herent: triathlete Pieter Heemeryck, pole-vaulter Elien Vekemans and duathlete Seppe Odeyn. These ambassadors helped us reach a broader audience.’ At the M-Fair in Malines, Ecolife also managed a workshop on fair sportswear. Piet Den Boer, a former local football player of KV Mechelen, promoted the campaign. 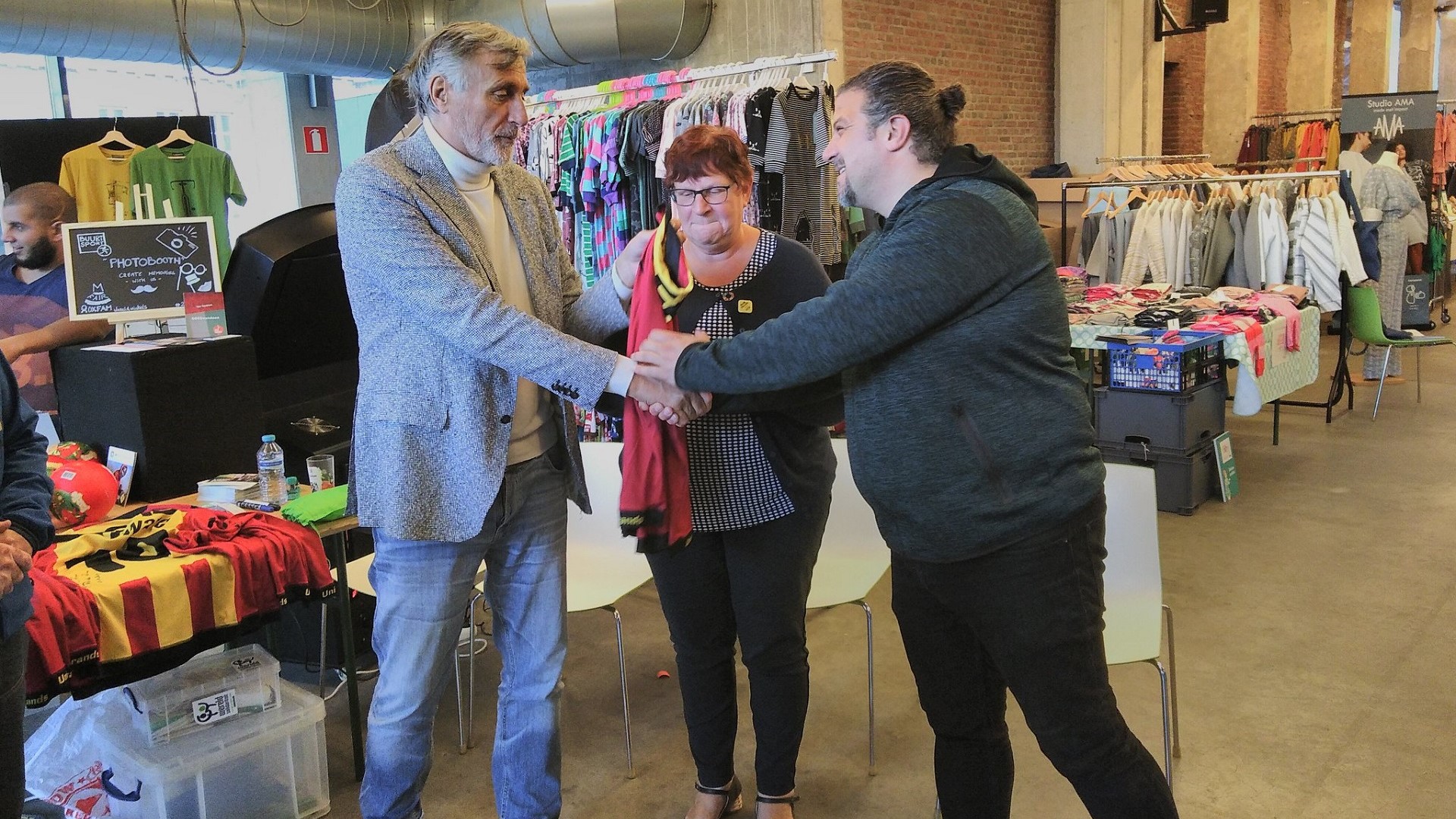 ‘Since our first participation to the Fair Trade Week five years ago, we have worked with an enthusiastic group of Herent FairTradeTown. The municipal services have also always been reliable partners. For sportswear we were helped by the Sports & Recreation service. Staff put us in touch with the right people in the sports clubs and put our project on the agenda of the sports council.’

Do you also organise fair trade activities at any other time?

‘We closely follow up the initiatives we launched because we want to be more than a one-shot awareness raising group. After two Fair Trade Week sportswear campaigns, we aim to permanently change the procurement policy of a school or sports club. We understand that a club or school cannot change supplier overnight. For instance, because they are tied by a sponsorship deal with their current supplier, they have to be supported by everyone in their organisation and the price must remain affordable. Most people only see the Fair Trade Week campaigns, but we are active behind the screens throughout the year.

‘Do not target too broad an audience, but clearly define in advance whom you want to reach. It is the only way to organise an activity that people are really interested in. When people visit your event because they really like it, the message comes across much clearer.’

Have people do something

‘People remember things better if they have experienced it or seen or done something, rather than only hearing a message. In other words, make your event interactive. It does not have to be spectacular. At schools we ask the children to check where their T-shirt was manufactured and we pinpoint this on a world map. That is something they will remember.’

‘Ecolife has the expertise to develop a path to make a town such as Herent more sustainable, but we do not have the workforce to set up a major event during the Fair Trade Week. That is why we always work with the local FairTradeTown initiative: we outline the path together and with the volunteers we achieve support and visibility. A group of enthusiastic people is essential to bring the project to a good conclusion. We complement each other well. We also consult expert organisations. Depending on the theme, we worked with the Clean Clothes Campaign, with local community supported agriculture (CSA) groups, with Oxfam-Worldshops and with the Global service of the municipality of Herent.’