Founded in 1963, COOPAKE, one of the oldest cooperatives in Burkina Faso, was born out of the desire of nine small mango producers in the west of the country to better sell their crops.

However, it only really took off in the 1990s, when it started using ovens to dry mangoes. This processing of the fruit created jobs for dozens of women, but also enabled them to export to Europe.

Meanwhile, the cooperative has broadened its activities, trading not only dried mangoes, but also sesame, cashew nuts and hibiscus (the petals are used to make juice, known throughout West Africa as bissap). In addition to the 160 existing members, this also resulted in dozens of new members, including women (especially for the hibiscus).

In order to meet the ever-increasing demands of the food industry and the market in terms of quality and hygiene, a thorough approach to the infrastructure was necessary. Both the storage space for the supplied mangos, the premises where they are peeled, the thirteen drying ovens and the packaging area were modernised with the available budget. But that alone was not enough to give the cooperative a new lease of life. Over the past decades, the region has seen a large increase in agricultural activities, especially cotton, fruit and livestock farming. This caused ecological problems that were exacerbated by climate change. COOPAKE speaks of ‘bad cultural practices’, such as the burning down of fields or systematic deforestation in order to put new land into use.

The second part of the project therefore consisted of a series of training activities, both on the management of the organisation and on ‘good practices’ of organic cultivation. An environmental impact study (imposed by the Burkinabe government) was also drawn up and, in order to raise awareness among a wider public, cooperation was established with a local radio station.

Thanks to financial support from the TDC, the cooperative was able to retain the organic and Fairtrade certificates it had previously obtained.

Does that solve the problems of the cooperative? Certainly not. The lack of rain in 2016 and 2017 resulted in a low mango harvest. Moreover, there is a problem of profitability: the price of fresh mangoes is rising – so is the price the cooperative pays to its members – but the price of dried mangoes does not follow that evolution. As a result, the hoped-for increase in turnover has not materialised; quite the contrary.

Fortunately, the cooperative has been diversifying its activities for some time now. Dried bananas are an option, but for the time being they are not really coming off the ground. Sesame and cashew nuts, on the other hand, are cultures that are widespread throughout the belt south of the Sahel. Sesame fields and acajou trees (on which the cashew nuts grow) also go well together. Since the beginning of 2017, COOPAKE has had a small-scale processing unit for roasting and packing cashew nuts. Finally, there is also hibiscus. The flowers of this plant are used throughout West Africa to make juice or tea.

In order to make this diversification successful, COOPAKE applied for the TDC marketing programme. From 2016 to the beginning of 2018, a marketing coach went to Burkina Faso four times to brainstorm and get to work together with the managers of the cooperative. At the same time, a coaching programme on finance & business management was running with the intention of raising the financial management of the organisation to a higher level.
During the sessions with the marketing coach, a whole series of ideas were put on the table:

COOPAKE has come a long way and in 2018 optimism prevails. “While there used to be barely 60 members coming to our General Assembly, there are now 100 of us”, one participant said during the last session with the marketing coach.

An important breakthrough was the contacts with the French fair trade organisation Ethiquable. Not in the least because it aspires to establish a long-term relationship, fully supports the diversification of COOPAKE and uses 40% pre-financing for orders. Ethiquable invested in processing the sesame into sesame oil in a French artisanal company, meanwhile sells a juice based on hibiscus (mixed with lychees from Madagascar) and also has plans to use roasted cashew nuts.
During the last session with the marketing coach, the participants were asked to sketch the situation of the cooperative. For 2015, they came up with a canoe: “We rowed with the straps we had”. By 2018, COOPAKE had already become a boat: “We are much more stable and now have an engine. We can go faster without exhausting ourselves”.

Colette Yehouénou lives in Cotonou, the economic capital of Benin. She was only thirteen when her father died, forcing her to stop her studies to look after her three brothers: “At the time, I already loved cooking, but I turned to haute couture. I trained and set up my own business. I combined sewing and haberdashery. I had customers who bought their supplies from me and one day one of them explained to me that he was taking a course in food processing. I was very interested, and I signed up for the second promotion”. 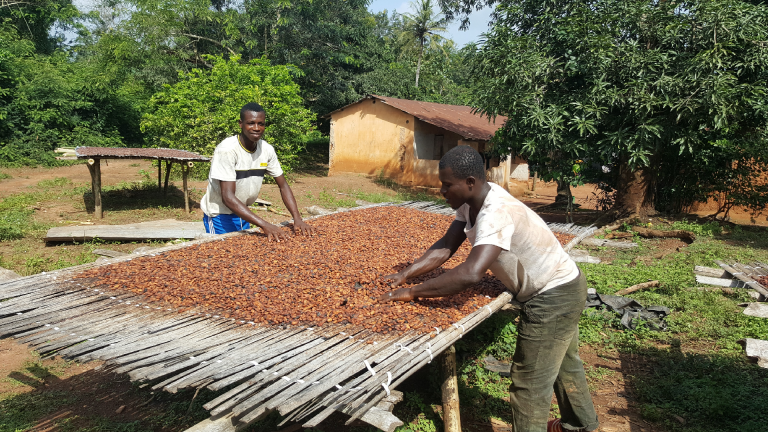